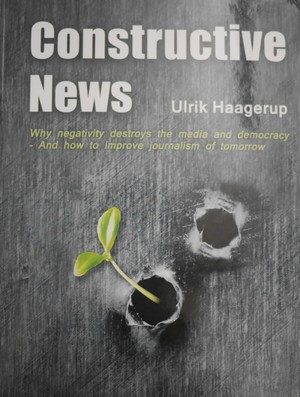 “We are not negative, we are just journalists,” we answer routinely, and follow up with very long explanations with the simple point, that journalism is about dealing with reality, And we ask them to imagine if we stopped covering stories about terrorists flying passenger planes into tall buildings in order not to be negative. That usually shuts people up for a while.

We gave up on politicians and the guys with ties a long time ago, because we grew tired of them asking: “Why don’t you report something positive as well?” For instance about all the good stuff they are doing?

“Buy an ad,” we would answer in an effort to embarrass them. What did they take us for – PR-agents or advertising sales people?

For me the focus on the negative began the first day at journalism school, back in 1982. “A story nobody is mad about, is a commercial,” the teacher said. That sounded cool. Because he had worked for a real newspaper, and now we were part of a brotherhood where nobody could be trusted. A good story was a bad story, we had to understand. And everybody arguing against that logic had only free publicity in mind. Politicians, who only dreamt of getting in the paper to attract votes for the next election, CEOs who only wanted to raise profits and interest groups, who only wanted help to put their special interests on the public agenda.

We loved to quote the biggest in the profession like former editor of The Sunday Times in London, Harold Evans, who said:

“Before interviewing a politician always ask: Why is this bastard lying to me?”

But after 30 years as a newspaper reporter, an investigative journalist, editor, news director and chair of journalism education, I’m increasingly worried how we as a media industry manage the power and the influence we have on society, on politics, and on our common future. Are we really acting in the interests of the societies we love to claim that we are here to serve?

Or have recent decades polluted our identity, our ethics, our views of the world, and our internal newsroom cultures?

My book on Constructive News, which is being published this month, is a search for answers.

It is hardly news that the paradigm shifts in technology, financial models and consumer habits have hit the news industry hard. No other business has found its role so fundamentally challenged, its value and worth so called into question, and its business models threatened to the point of extinction. Readers, listeners and viewers in the millions are turning their backs on traditional media, and I have found that one of the reasons for the fundamental crisis is that people are sick and tired of the negative picture of the world presented to them by the press. Most news stories in traditional media are angled on conflict, drama, crooks and victims.

The old newsroom saying “If it bleeds, it leads” is proven deadly wrong. Tabloidisation of news, even in so called serious print media, online and television news, has gone too far. Constructive News is a wakeup call to a paralysed media industry infected by cynicism. It is intended as a handbook to inspire us to do better – in our newsrooms, in public debate and in our democracies. It seeks to document that constructive news is neither an alternative to critical watchdog journalism, nor is it an argument for harmless positive news. It argues that good reporting can inspire solutions to the problems facing society giving way to a new and more meaningful role for journalism.

As CEO of Huffington Post, Jimmy Maymann, puts it:

“Why does news have to bleed to lead? With Constructive News, Ulrik Haagerup puts focus on the missing link in news coverage today: What’s inspiring, what’s  positive and what’s working.”

“The consequences are many and severe. Firstly people get a false picture of reality. Secondly the West now suffers from lack of ledership. Media-democracies do not produce leaders, but populists.”

Note: Constructive News was published by the Swizz InnoVatio Publishing AG this week.