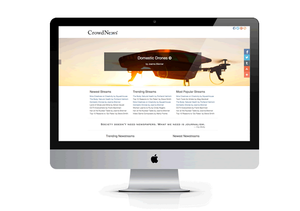 The Arab Spring in 2011 was called the ‘Twitter Revolution,‘ where social media turned ordinary citizens into amateur journalists. As news organisations scrambled to send professional journalists into the region, for Michael Wheeler – founder of a la carte journalism website CrowdNe.ws – it was an epiphany. “Because mainstream media couldn’t really get boots on the ground,” Wheeler said. “All the news came directly from news from cell phones held high.”

The bloggers and dissentents who broadcast the movement to the world from their smartphones to the public, made Wheeler think about whether journalists could do the same thing. “That was that inflection mode where I saw that the news could come directly from the journalist to me,” he said. “And then I thought, how can I make that happen? What will it take for journalists to be successful and for the audience to get the news that they want?”

Discussions on how to make a newsroom profitable in a digital age continue. “In the pre-digital era, business models for journalism were relatively simple: circulation revenue, subsidy (mostly for public-service broadcasters) and advertising,” George Brock, Professor of Journalism at City University in London said. “They worked the same way for very varied publishers.”

The digital age, Brock said, means that the nature of revenue raising has changed. “What we start to see now is a widening variety of models which work and where they are mixed, the proportions differ,” he said. “There are ad-revenue based models (Buzzfeed), there are subscriptions, there are paywalls (both strict and porous), there are some micropayments (Blendle), there are event income streams (Texas Tribune), there are privileged readers clubs (The Guardian and The Times).”

However, Brock does not think that this is a stand alone approach. “I don’t think any one of these things is an “alternative” to another,” he said. “They’re all being tried and various experiments and the most striking result we’ve had so far is different things work for different sites in different markets.”

The traditional journalism model, Wheeler said, is irrelevant in the technological age. “Legacy media is actually a model that began in the 1800s where there was controlled distribution of news, they had the journalists, they had the printing plants later the broadcast studios and so they were the only conduit from the journalist to the audience,” he said. “Now digitally we don’t need that any longer.”

“Most people get a newspaper, and they thumb through it till they find a story that they’re interested in,” Wheeler said. “A paywall is just another form of paying for the content as you normally do… Now you’re paying for access to the whole publication, whether you read one story or none or all of them.”

The response to his a la carte journalism model, according to Wheeler, has been largely positive. “When I talk to journalists they are ‘oh yeah, I can see how this is going to work,”‘ he said.

The response from the public however, is mixed. “When I talk to audience members they say, ‘well I get all my news for free,” he said. “And I say, ‘how much of that is really valuable to you?’. And they go, ‘yeah, most of it is throw away’. Everybody has an area that they’re really interested in, they value the information.”

Pay-per-view models have been attempted in various forms by different publications. Wired is experimenting with ebooks, while the Wall Street Journal has launced individual videos and republished long form pieces. The New York based Pro Publica has achieved some success with the singles format. And the popularity of audience-curated content, like Flipboard, suggests that the a la carte model of funding may work.

Knowing how to price something under the a la carte model, however, is largely uncharted territory. Wheeler is looking at a number of different options. “We’re looking at three different pricing models,” he said. “One, where the journalist defines the price, one where the audience defines the price and then later on we’re going to be introducing our dynamic pricing engine.”

The dynamic pricing engine, prices an article based on its changing popularity. “So let’s say, what’s going on in Iraq right now. The peak of the war interest had past and there was less and less news about it, but suddenly ISIS appears and then that content again is valuable. So it would be a market for content as interests waxes and wanes.”

“So as content becomes more popular and more relevant the price of it goes up, and as it peaks it will go back down. But on crowdnews that content is always available for purchase.”

If the a la carte model becomes popular, will this remove the need for major publications? Will journalists move to freelancing now that they can charge for their content directly?

“That’s our whole model,” Wheeler said. “It’s not to say that the tools that The New York Times provides – fact checking, editing, headline writing – those tools are unnecessary. But they no longer need to be under one roof.”

One of the major issues faced by journalists is sharing of content. The traditional journalism landscape, Wheeler said, does not cater to journalist revenues each time content is shared. “Sharing is really important,” he said. “Because one of the underlying tenets is that journalists should get paid every time their work is consumed. If your article goes viral, a million people read it, you don’t make any more money from it, your organisation makes no more money from it.”

Brock however, said that the different funding models used by news publications means that the way journalists make money will be varied. “The way journalists work for pay will likely follow the same pattern,” he said. “There will be people working for salary and contract in, or associated with, big newsrooms. There will be freelance contributors whose work may be loosely linked to a news media brand (the Forbes model) and they may produce a lot of material. Some bloggers will run free-standing subscription-based operations.”

But the introduction of pay models like a la carte journalism, Brock said, will not change the way journalists go about their work. “I’d be surprised if this fundamentally altered the way people do journalism,” he said. “The difficulties of making a living present a permanent temptation to cut corners, use clickbait etc – but that’s been the case since the 17th century.”