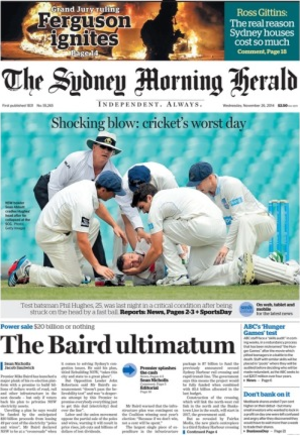 The Australian former test batsman is in a critical condition in hospital after being struck in the head by a cricket ball whilst playing a match at the Sydney Cricket Ground. The SMH published the photo with a story updating Hughes’ medical condition, with the caption, “Shocking blow: cricket’s worst day.”

A barrage of comments followed on the SMH’s Facebook and Twitter pages. Most commenters on the post were giving their well wishes to the cricketer and his family, however, others labelled the photo as “desperate”, “bad taste”, “dreadful, “drop the photo. Show some respect”. One comment, however, said the photo showed, “care and compassion”.

But the backlash led Editor-in-Chief Darren Goodsir to issue a statement explaining the decision to run the photograph. It reads: “as traumatic as this moment is, it was felt that the compassion and humanity on display, combined with the image’s poignancy, demanded it be published.” Goodsir added “I understand and respect the views of our readers and audience who feel we have transgressed by publishing this image.” The Herald wished Hughes a full recovery and said their thoughts were with his family.
There was a mixed response to the statement on Twitter. 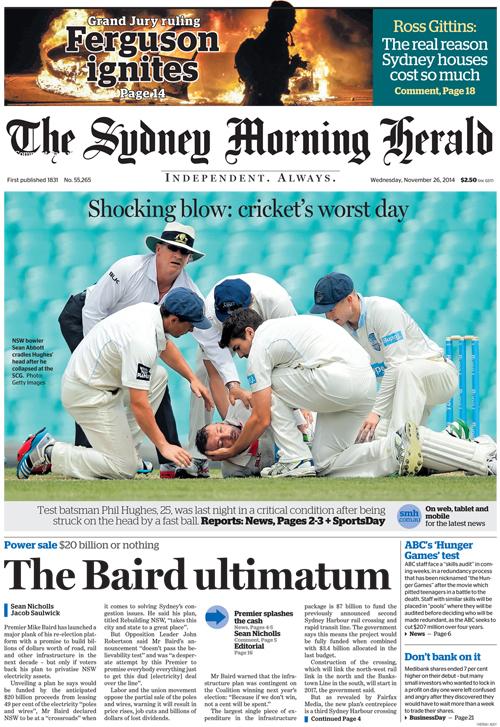 @smh @sirgooddarren the very fact you feel compelled to explain yourself says it all. Absolute literal grab for headlines. Disgraceful!!

@smh @sirgooddarren Pathetic excuse for an insensitive and selfish mistake. An apology and removal of the photo should be your only action.

While others appreciated the explanation,

@smh @sirgooddarren The publication of this photo makes sense….It captures a poignant, very human response to an unexpected event..

See Rob near The Otways’s other Tweets

The question of publishing content for the public interest versus being sensitive to Hughes’ family and friends was raised by Goodsir, “Balancing what is in the public interest, against intruding on the personal space of individuals – be they regular citizens, sporting identities, politicians or celebrities – is a responsibility all in the Herald newsroom take seriously.”

Despite the negative attention the SMH received, they were quick to point out the Australian Broadcasting Corporation’s (ABC) Twitter post controversy connected to the same story. Popular sports program ABC Grandstand tweeted: “Cricket NSW “could not confirm if Phil Hughes was alive when he left the ground.”

The SMH reported that ABC Twitter followers branded the tweet as “stupid”, “unnecessary”, “horrible journalism”, “disgusting”, “poor form”, “hugely irresponsible” and “a disgrace” and later apolised for the tweet.

Our earlier tweet about Phil Hughes’ condition as he left the SCG was insensitive and we apologise for any distress it may have caused.

147 people are talking about this

Update: Phillip Hughes passed away on November 27 from his injuries.