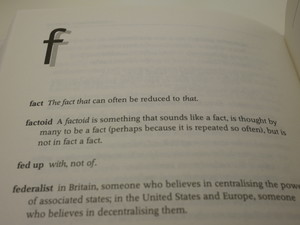 “I don’t understand why everyone is focusing on Kim’s booty.” he said. “Obviously I love her ass. That’s why I married her. But nobody has an ass like mine. I have one of the top three asses of all time. My booty is like Michelangelo level, you feel me? It’s like a sculpture.”

The New York Times then had to post this correction: 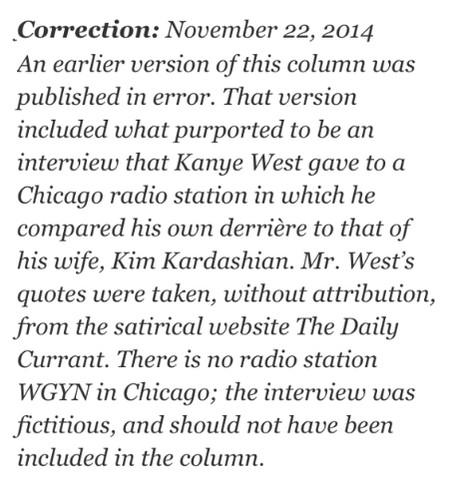 In 2012 major news organisations like The Guardian,  Forbes and CNN reported that Bruce Willis was considering legal action against Apple in a bid to leave his iTunes music collection to his children.

“Bruce is more usually seen escaping from explosions and battling terrorists to save the world.” The Daily Mail wrote. “His latest battle, however, takes him to the considerably quieter world of the courtroom – although he still faces a formidable opponent.”

Major news organisations published versions of the story without contacting Willis or his legal counsel. The story originated in The Sunday Times in both print and its (paywalled) online story, aptly titled “it’s iHard as Willis Fights Apple.”

While the story raised important issues about digital content ownership, it was later revealed that Willis was not in fact suing Apple. It took a tweet from Willis’ wife Emma Heming-Willis to deny the story posted by the Sunday Times.

#itunes #BruceWillis #will @EmmaHeming just tell Bruce to give his daughter his login and password to PC and iTunes, he will live forever )

@RichieD_ it’s not a true story

45 people are talking about this

In 2012, news rapidly spread about Rupert Murdoch’s now ex-wife Wendi Deng joining Twitter. @Wendi_Deng briefly had a verification tick on Twitter, leading many news agencies to report on her tweets, including a flirtatious tweet targeted at comedian Ricky Gervais:

“When I got to hear that NI had called it legit too, by that stage I’d entered ‘what the hell’ territory and thought I’d just carry on and see where it went, seeing as Twitter had already verified it. I knew that sooner or later they’d realise what a dreadful mistake they’d made.”

In January 2014 the internet jumped on what seemed to be a new trend among young women, the hashtag bikinibridge, where young women took photos of themselves in bikinis, showing the space between their hip bones and their bikini bottoms.

A fake Tumblr, some screen grabs of Justin Bieber and Harry Styles supposedly endorsing the trend meant that media organisations jumped at the opportunity to report on the next ‘thigh gap’ trend (where girls take photos of their thighs which do not touch).

Buzzfeed also reported on the trend, with a blog post titled “12 perks of having a bikini bridge.” The original blog post was since deleted but replaced with this one when it was later revealed to be a hoax orchestrated by 4Chan.

5. Steve Jobs and the iPhone 4

The Daily Mail in 2010, reporting on the release of the iPhone 4, stated that Steve Jobs himself had tweeted: “We may have to recall the new iPhone. This, I did not expect.”

The Daily Mail then published a post titled: “”Apple boss Steve Jobs reveals iPhone 4 may be recalled.” (The post has since been deleted).

The Twitter account, @ceoSteveJobs (since deleted) unlike Wendi Deng above, was clear that it was a fake account, stating, “”I don’t care what you think of me. You care what I think of you. Of course this is a parody account.”