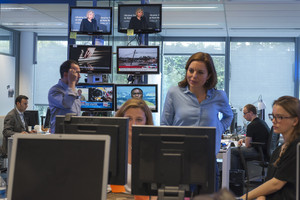 South African journalist and researcher Dr Glenda Danielshas just released a report on the State of the Newsroom in her country, which indicates a decline of approximately 9% in the number of women holding Editor-in-Chief positions on major South African titles since 2013.

Daniels recently spoke on a panel at the World Publishing Expo in Amsterdam, along with prominent Filippino journalist and Rappler CEO Maria Ressa, about the ongoing impacts of the newsroom glass ceiling and the risks of the so-called ‘glass cliff’ (see video highlights from the panel discussion – staged in conjunction with the 13th International Newsroom Summit – below).

According to Daniels’ research, the stereotyping of women in news prevails. “There are still patriarchal, very sexist terms. For example, when you talk about two male editors having a spat with each other, it’s called a ‘spat’. But when it comes to two big Sunday papers that happen to be edited by women, it’s characterized as ‘two cats fighting’. They say ‘What a bitchy war’ and ‘The claws are out’. It’s really sexist, and in my view misogynistic, language used to caricature women.”

How do we get past the depressing statistics?

Former CNN journalist and news start-up CEO Maria Ressa said that forging alliances between women, across corporate media boundaries, is essential. “Whether it is going to be in pay or editorial positions or benefits, we deserve equality. Collaboration, alliances and really talking to each other are key,” she said.

Ressa cited the example of an allegiance of women newsroom leaders in the Philippines that challenged the mass arrest of journalists during a coup attempt. “All of our journalists had been arrested, I was then heading the largest TV network in the Philippines, and all of them had been trucked off to the police station. And we decided we were going to take a position and it was a hardline position against the government, which our male colleagues didn’t want us to do,” she told the panel. “We decided we were going to do it. It dictated where our industry was going to go. They were trying to shift the definition of what journalists can do in a conflict, so we challenged this at the Supreme Court. Alliances help.”

The new threat to women in news: Cybermisogyny

While highlighting the potential of social media channels to act as conduits for women’s empowerment and solidarity, both Ressa and Daniels acknowledged the growing impact of ‘cybermisogyny’ on women journalists – the theme of a presentation I made at the Summit.

A recent UK study of Twitter abuse targetting celebrities found that “Journalism is the only category where women received more abuse than men, with female journalists and TV news presenters receiving roughly three times as much abuse as their male counterparts.”

Cybermisogyny, expressed via online sexual harrassment through to stalking and threat of violence, is a genuine psychological – and potentially physical – risk to safety of women journalists. It is also a threat to the active participation of women in civil society debate, fostered by news publishers, through online commenting platforms and their social media channels.

Pulling back is one response to gendered abuse that is gaining momentum among women within online communities. The recent launch of a video platform built by women and aimed at women, in reaction to the very sexist and misogynistic comment threads pervading YouTube, highlights the appeal of safe spaces for women online. But this is not a realistic option for women journalists working within mainstream newsrooms, where engagement with broad audiences via popular social media channels is now essential.

And it can be an especially brutal experience when you’re writing about feminism, as Jezebelstaff recently pointed out to Gawker executives, “It’s like playing whack-a-mole with a sociopathic Hydra…It’s impacting our ability to do our jobs.”

So, if pulling back isn’t an option, what can be done?

Here are nine recommendations for managing cybermisogyny based on those I made at the recent International Newsroom Summit, in a presentation titled ‘Navigating the Sexist Cesspit: Audience Engagement and Gender’ (see Slideshare presentation below).

However, if newsrooms themselves remain bastion’s of male domination, harrassment and sexism, better management of the impacts of cybermisogyny will not have a major impact on new moves to target women’s empowerment in, and through, the media.