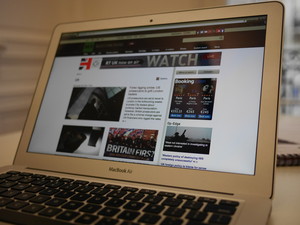 Commentators, such as Eliot Higgins from fact-checking website Bellingcat, have derided the news channel as “nothing more than a mouthpiece for the Kremlin.” And the program’s introduction was described in a Reuters article as “[s]eeking to extend Russia’s soft power in a close U.S. ally.”

But RT UK senior correspondent, Laura Smith says in response to claims RT UK is Russian propaganda, “no, absolutely not. We [present] news from a different perspective. And if you look at RT America as a blueprint, that also has no specific Russia content, except when Russia is featured in the news that’s to do with the US, and that is exactly what we are looking to do.”

The RT network now has three global news channels broadcasting in English, Spanish and Arabic. RT America airs from Washington DC, and last month RT launched RT UK. It broadcasts five hours of content specifically produced from London for U.K. viewers. RT reaches over 700 million people in over 100 countries, not to mention the one billion views on their Youtube channel.

Since 2005, RT international has been broadcasting in the UK, initially for three hours on Freeview. It now airs 24/7. Smith said RT originally produced news from a Russian-centric viewpoint, but now they real present content from a different perspective.

“Around the world a lot of news broadcasters are quite homogenous and so we decided that we would try to either do news that other broadcasts and other media weren’t really touching and/or things that they were touching on but try to do it from a different perspective. It has been a very successful tactic,” Smith said.

RT UK says it aims to presents alternative news from mainstream broadcasters and to give a voice to those not being represented.

Higgins agrees that RT UK has been well received by their viewers but still questions RT’s credibility and newsworthiness.

“There’s certainly a receptive audience for the sort of information Russia Today likes to put out, and they regard Russia Today as credible regardless of facts, so I don’t think their credibility is a factor for that segment of the audience,” he said.

“Russia Today appeals to a certain audience that is primed for exactly what they are given from Russia Today, so I don’t expect much of a [backlash] reaction like that from them, they get what they want, and now they’ll get more,” Higgins said.

However, RT’s international arm was found guilty of breaching imparitality regulations and has been threatened with statutory sanctions by Ofcom, Britain’s broadcast regulator. Ofcom flagged four RT reports for their biased coverage of the Ukraine crisis, and for showing graphic footage of an Islamic State militant committing murder.

“I think most journalists regard stories coming from Russia Today with plenty of scepticism already, they seem pretty much regarded as a joke when it comes to real journalism,” Higgins said.

But Smith counters, “I think that propaganda is a word that the media specifically like to bandy around. The U.S. and U.K. mainstream media aren’t used to being challenged and it is easy to throw around that word for anything that contradicts the narrative they are used to.”

It has been reported that RT’s budget is set to increase to over 200 million pounds in 2015. But Smith said it would not affect RT UK because it will go directly into launching RT French and German channels.