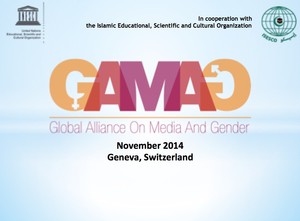 “We cannot talk about equality, good governance, freedom of expression and sustainability when women are effectively silenced in and through the media, and where new technologies are used to undermine the human rights of women and women journalists,” the Alliance’s International Steering Committee declared at the end of its inaugural meeting.

GAMAG is a network of 500 media organisations and civil society groups from around the world. It is an initiative of UNESCO and it was forged during the watershed Global Forum on Media and Gender conference, held in Bangkok in December 2013.

It’s 20 years next year since an historic UN conference in Beijing saw 189 countries adopt the Beijing Declaration and Platform for Action, a visionary roadmap for women’s rights and empowerment.

But “…the digital and media gender divides remain a major concern that must be addressed in global pacts for the future,” the GAMAG Committee said, expressing concern that progress towards media that support gender equality and women’s rights objectives remains painfully slow. The group aims to “…amplify and give visibility to existing key regional and global initiatives on gender and media to hasten the pace of change.”

It is calling on UN member states to include strong provisions on gender, media and Internet Communications Technologies (ICTs) in the post-2015 Sustainable Development Goals (SDGs) – goals which will frame the UN’s agenda in these areas.

Provisions that GAMAG wants included in the SDG’s include:

Masses of research confirms the scale of the problem

There are decades of research – industry and academic – that confirm the appallingly low presence of women in senior media management and editorial positions, and the poor, stereotypical representation of women by the media.

For example, research conducted by the Who Makes the News project shows that women constitute a mere 24% of news sources. And a global study by the International Women’s Media Foundation shows that women make up only 36% of reporters and a quarter of media decision-makers.

Other studies have revealed a growing gender gap in access to, and ownership of ICTs. New media is also fuelling new forms of violence against women and girls ranging from stalking and trolling to human trafficking.

But there is no group collecting data on security threats to women journalists globally. Attacks against female media workers are only reported anecdotally, if at all, by international media support organisations. However, the GAMAG International Steering Committee heard that threats and violence against media workers in general are well-documented, especially with regard to deadly attacks, by organisations like the World Association of Newspapers and News Publishers (WAN-IFRA), the International Federation of Journalists (IFJ), Committee to Protect Journalists (CPJ) and Reporters Sans Frontières (RSF).

So, what will GAMAG do now?

Priority actions identified by GAMAG include:

At the conclusion of the meeting, South African media and gender activist Colleen Lowe Morna, Executive Director of GenderLinks and GAMAG’s International Steering Committee Chair, asked “Can we make a difference in 2015?” The collective reply was resounding: “Yes, we must!”

Note: Use the hashtag #MEDIAGENDER to engage in these debates and you can review the GAMAG ISC’s deliberations on Twitter via the #GAMAGISC hashtag.

Declaration: WAN-IFRA is a parnter of the GAMAG and it has two representatives on the International Steering Committee, Julie Posetti is one of them.