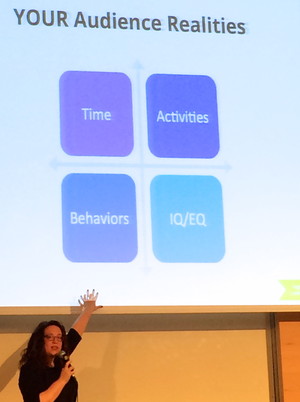 TULLIS: What is one of the biggest trends that will affect journalists?

WEBB: Behaviours will be more important than devices. Up until now journalists, especially newspaper publishers, have had to make some decisions about publishing content so that it can be economical; so you publish it in one place and then it goes to a phone, a tablet, a computer all at one. The challenge now, and I think the trend going forward, will be not just publishing responsibly for the device but for the individual person. And the organisations that are able to do that will be wildly successful next year.

There has been quite a lot of talk about algorithms, what companies do you think will be leading the algorithm charge?

Universities are really the places to look first because that’s where there is great experimentation being done. And unusual universities, like the University of Washington is leading a lot of the research on image recognition and are doing some amazing things. So I would look at a lot of the university research and a smart news organisation will partner with those universities to figure some of these things out together.

There has been resurgence in podcasts and they are becoming more popular. What does this trend mean for journalism and for news organisations?

I know that the heads of news organisations all see this as a way to make money, because with a podcast, the rate that you can make per user on the web is much below what you can make per podcast listener if it is a really good podcast, but you have to scale that. So I think there is an opportunity and they will probably be looking at money. I think that this means for individual journalists that there is even more of an opportunity and probably a need to be become an individual brand that people can recognise. Podcasts might be the new blogs.

A lot of issues are converging around source protection and issues around metadata and government surveillance. Do you think that trend will keep getting bigger?

I can [only] speak for the United States, as every country has a different attitude towards privacy and production and laws. It is easier and easier to figure out who somebody is. Uber which is used all over the world, just had some new data that came out that shows Uber is not protecting its data; that people who were applying for jobs could look at Uber’s data to see individual people and where they were going and coming from. We are giving up our privacy in new ways that we are not even realising and that can be incredibly problematic, especially for reporters who want to not just protect themselves but their sources, so it’s very, very problematic going forward.

Can you see a solution to the problem?

The best thing to do at this point is to educate people as much as possible. It’s about understanding and the more knowledge that you have the better protected that you can be.

Visit these links to read a wrap of the Tech Trends report and a summary of the conference.

Amy Webb spoke at the New Practices of Journalism conference at Sciences Po in Paris on Monday, which is where these photographs were taken.