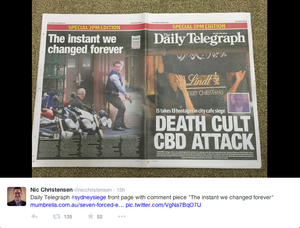 Live blogging and rolling coverage of the event by many major news organisations helped to inform the public but it also spread misleading claims early on. Among the false claims was that an Islamic State flag was being used in the siege and that Sydney air space had been closed. Journalists and citizen commentators also speculated about the gunman’s motivations, what weapons the hostage-taker may have had and if or how the siege was related to terrorism.

BREAKING: Hostages are being forced to hold an ISIS flag at a Lindt cafe in Sydney’s Martin Place, as police man the doors outside #7NEWS

371 people are talking about this

Reports #Sydney airspace has been shut down as result of #martinplace #siege situation are INCORRECT. http://yhoo.it/Pv0Z9N

15 people are talking about this

A number of professional media organisations released reports over the course of the siege to help the public sift facts from speculation and myth. The Australian Broadcasting Corporation wrote a list of “what we do and don’t know”. The Sydney Morning Herald wanted to update the myths circulating on social media and The Guardian Australia released, “what we know so far”.

The siege was declared over by NSW police at around 2:45am Sydney time. NSW Police reported that the gunman and two hostages were killed.

“This is a complex story — and one full of ethical risks and verification pitfalls. It also has the potential to do significant harm to Muslim Australians if it is mishandled, through the magnification of inaccurate information, prejudicial tropes and myths,” Julie Posetti, WAN-IFRA and World Editors Forum Research Fellow told the Conversation UK.

Correcting the record in realtime

As journalists navigated the complex breaking story, their errors were corrected in realtime by their followers.

Early on in the siege, professional journalists claimed that an IS flag was seen at the cafe.

Ben Cubby, deputy editor of The Sydney Morning Herald, was among them.

58 people are talking about this

Other media professionals, citizen journalists and general public quickly asked for verification of this claim.

@bencubby Is the flag verified.

What was the source of the ISIL flag reference, Ben? @wombat1974 @bencubby

@julieposetti @wombat1974 @bencubby confusion over flag types. Actually a shahada – different to IS

Then, reporters began to publicly respond to the ethical dilemmas presented by the gunman attempting to issue demands through the media, and police asking them to withhold details of their manoeuvres.

The deputy editor of Business Review Weekly, Caitlin Fitzsimmons, announced that she would stop tweeting about the siege to avoid more serious implications for the hostage situation.

I’m ceasing to tweet or retweet about hostage situation until it’s over. I don’t want my tweets to inform bad guys’ actions and reactions.

Murdoch’s Sydney tabloid The Daily Telegraph published this headline in their special 2pm edition, “IS takes 13 hostages in city cafe siege” with “Death cult CBD attack”. The claims that the gunman was a member of the “IS” and a “death cult” do not appear to have been verifiable at the time of publication.

Hostages contacted various media organisations with demands from the gunman. NSW Police asked media organisations not to report on the demands and they largely complied. The ABC 7:30 Report knew the identity of the gunman, before news outlets were permitted to release his name, but as interview producer for the ABC 7:30 Report, Julia Holman tweeted, they will not reveal him, as requested by police.

Police have identified who the gunman is. He is known to police. NSW Police have asked the ABC not to identify him #sydneysiege #abc730

375 people are talking about this

There were calls for calm during the siege by the NSW police and the Australian Muslim community. And there was a positive response from some social media users, with the hashtag #illridewithyou becoming the world number one trending topic on Twitter. The hashtag was started to show support for Muslim Australians following the siege. People offered to accompany Muslim Australians who feared riding on public transport alone.

“The initial offer of help was retweeted several hundred times and the hashtag became a forum for those expressing support and empathy for Muslims who were feeling targeted. According to Twitter Australia, 12 hours after the siege began, there were 90,000 tweets (or 260 per minute) referencing #illridewithyou,” Posetti said.

“Social media both speeds up the coverage of a story such as this and risks magnifying inaccuracies. It allows journalists to interact directly with witnesses and official sources in real time, but it poses a significant problem for law enforcement as citizen reporters and witnesses gathering near the scene join mainstream media in sharing pictures, video and details of police manoeuvres in the midst of a delicate hostage crisis,” she said.