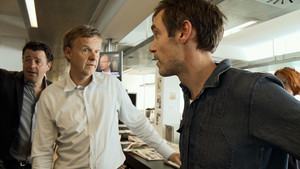 With unfettered access to the newsroom, the film tells two parallel stories. One story is the Danes’ love/hate relationship with the tabloid newspaper and its controversial coverage of the Danish hostage crisis in Somalia that ended in 2013. The other is the catastrophic drop in Ekstra Bladet’s print circulation, even as the paper covers the big stories.

“If only someone had solved this problem of making a paper edition that more people wanted to read. We would copy their strategy” – Poul Madsen addresses the newsroom in Off the Record.

The story highlights the savage challenge for any news organisation that lives from the newstand. As the paper has gone from a circulation of 110,000 in 2004 to 46,000 in 2013, they have tried to make up the difference online. While ekstrabladet.dk is by far the biggest news website in Denmark, it’s a hard road finding revenue that matches the almost 3 euro daily cover price of the print version and associated ads. The documentary tracks the launch of EKSTRA, their growing freemium subscription, but also the parallel lay-offs in the newsroom.

It’s astonishing how much access Mikala Krogh, an acclaimed Danish documentary director, is given to the internal workings of the newsroom. Editor-in-Chief Poul Madsen, also a central figure in the film, said he decided if the cameras should have access, then they should have access to everything.

“We just got the statistics showing which of our stories got us online subscribers. They were all about naked boobs, sex – twisted and raunchy stuff. Very few of the stories had any substance. That was depressing.” – Tina Johansen

It’s only fair to say the picture has changed radically in the short time since the film was made. They now have 25,000 subscribers instead of 2,400, and much of the growth is being driven by real journalism.

At the film’s launch at IDFA (www.idfa.nl) in Amsterdam, Madsen led several Q&As, but the film tells the story succinctly and eloquently without need for explanation. And it appeals strongly to the emotions.

How can you fail to have an opinion on Ekstra Bladet’s coverage of the hostage crisis versus the media blackout of their competitors? Who could not be touched as the union representative decides to resign to avoid others being made redundant? How can you not sympathise when a rookie reporter buzzes the flat of a bereaved family and asks how she will not appear as a “cold bastard”?

Yes, this is also a film for students of ethics in tabloid journalism. But part feels almost quaint and historical as the print edition has less impact on the daily agenda and online is driven by social media, SEO and the Side 9 girls.

The truth is that no-one has really solved the problem of discoverability, and social media algorithms are stealing the job of the algorithm. For that story, see Emily Bell’s speech as republished in our blog.

There are quirks in the film. The compressed timeline makes it seem like every week is a momentous team meeting with bad news and profit warnings, and ominous music from composer Jonas Struck makes sure any drama is played for maximum effect.

It also seems Madsen is not allowed to drive anywhere in his car without someone with a camera in the passenger seat. Yet these moments outside the office give moments for pause and reflection. This, for example, is the only time we see him express regret over their Somalia story, albeit slightly tongue in cheek after they have been forced to publish a press complaints judgment: “From now on I will refrain from interviewing hostages – if I ever get another chance. I won’t interview hostages like we did. It’s degrading for them to get a call from us.”

If you work in a newsroom and want a reminder of the scale of the task in moving to digital, this is a must-see film. It’s so far only released in Denmark, but we saw a version with English sub-titles, and we will let you know as soon as it has an international release.

We just did an interview with Poul Madsen. Full article will appear here soon.