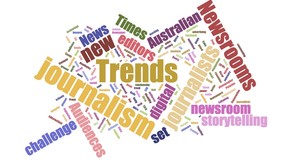 1. Jay Rosen to journalists and editors: ‘Facebook has all the power. You have almost none’. By Julie Posetti

Amid growing calls for US and UK regulators to launch formal investigations into Facebook’s disturbing mood manipulation research, leading US media scholar Jay Rosen has a reminder for journalists, editors and personal social media users alike: “Facebook has all the power. You have almost none.”

2.Australian photographer forced to delete images after being held by private security guard. By Julie Posetti

Sydney Morning Herald photographer Nick Moir was detained by private security guards working for an Australian immigration detention centre in Papua New Guinea. Moir was detained in the vicinity of the Manus Island hospital by guards who forced him to delete his photographs.

New legislation is set to be introduced in Spain to prevent news aggregators from reproducing other’s content without payment. What are the ethics of aggregation?

She broke new ground as the innovative Ideas Editor for Quartz and now S. Mitra Kalita has been announced as the new Executive Editor at Large of The Atlantic’s much vaunted digitally-native news site. In her new role, she has special responsibility for global expansion and ideas, according an announcement from Quartz Editor-In-Chief Kevin Delaney. Just ahead of her appointment, Kalita spoke to the World Editors Forum’s Julie Posetti at the International Newsroom Summit in Amsterdam.

Print and digital combined are increasing audiences for newspapers globally, but digital revenues are not keeping pace, posing a risk for newspaper businesses and the societies they serve, the annual World Press Trends survey released by the World Association of Newspapers and News Publishers (WAN-IFRA) reveals.

6. How the New York Times is learning lessons about digital storytelling and audience engagement as The Great War resonates through a century. By Julie Posetti

The New York Times is experimenting with cutting edge 21st Century digital storytelling to explore the legacies of The Great War, which began in earnest 100 years ago this week. And it’s learning valuable lessons about contemporary journalism in the process.

The need to urgently shield investigative journalism in the post-Snowden era is the burning issue in newsrooms globally, according to the World Editors Forum Trends in Newsrooms 2014 report, launched in Italy.

8. Six tech trends that are set to change news media in 2015. By Ashleigh Tullis

Webbmedia Group has released their research into near-future trends in digital media and technology. They have identified 55 key insights about media trends in 2015. We share the top trends relevant to news organisations and editors.

9. Emily Bell’s seminal speech on the relationship between journalism and technology: It’s time to make up or break up. By Emily Bell

Emily Bell, Director at the TOW Center for Digital Journalism at Columbia Journalism School, delivered what the World Editors Forum believes to be the year’s most definitive speech on the future of journalism. In it, she challenged journalists and editors to hold dominant technology companies publicly accountable, take the lead in technological innovation in news and help to shape the ‘new public sphere’. This is an edited version of her speech to the Reuters Institute in Oxford, published with permission.

“You barely think of video as a separate thing anymore, it’s just a way of telling a story,” incoming Editor-in-Chief of TheGuardian.com, Janine Gibson told the World Editors Forum. Here, we report on the rise of online video news and the challenges of making it profitable in this instalment in our Trends in Newsrooms series.

Australian journalists reporting on terrorism could risk imprisonment under a suite of new national security laws and policies proposed by Prime Minister Tony Abbott’s government, and now backed by a key parliamentary committee. The legislation, which appears increasingly likely to be enacted, represents a chilling attack on media freedom in a progressive democracy.

12. How editors and journalists can produce better and fairer reporting on people with disability. By Shawn Burns (University of Wollongong, Australia)

Partnerships between advocacy groups and the mainstream media are a hallmark of the rise of Advocacy Journalism as a conduit for meaningful social change. And some of the most prominent collaborations seeking to facilitate self-representation for minorities have involved people with disability (PWD). However, there’s still much work for editors and journalists to do in this area.

13. Constructive News: The next mega trend in journalism? By Ulrik Haagerup

“We – publishers, editors, reporters and other members of the press – have been asked just about every time we happen to talk to normal people outside our profession: Why are you always so negative?”. In his newly published book, Director of News at Danish Broadcasting, Haagerup argues that negativity destroys the media and democracy.

14. “Following a story is unique to us, and you can’t do that with a summary”: pioneer David Cohn on Circa, copycats – and Candy Crush. By Nick Toner.

David Cohn is quickly becoming one of the leading names in digital media. Interested in online journalism and how citizens can engage with it, the San Francisco-based writer, speaker and academic founded Spot.Us, one of the first crowdfunding sites, in 2008. He is now Chief Content Officer at Circa, a mobile app which breaks down news into concise, “atomized” blocks of content – separating out the facts, opinions, quotes and more.

15. What does the future of online commenting look like? By Ashleigh Tullis

Publications such as Reuters, the Chicago Sun-Times, tech site Re/Code and Popular Science have all turned off their commenting systems on their news sites. The arduous task of moderating the hundreds of uncivil comments that plague comment threads are making news sites reconsider their value. With more and more sites turning towards social media for reader contribution, what is the future of online reader comments?

It’s still the most talked about story in South Africa – the trial of Oscar Pistorius has been the country’s biggest judicial moment of the century. It’s also been their biggest social media moment, marking a turning point in the way local journalists and media use online platforms and deliver their news.

17. How do journalism schools measure up as a training ground for newsroom innovators? By Emily Bennett

“The new blood [in our newsroom] is coming from the J-schools in the US. We almost exclusively hire J-school graduates.” That was the encouraging message for journalism students from Editor-in-Chief of USA Today, David Callaway, during a World Editors Forum panel on newsroom innovation in Turin last month. Despite the convergence of crises in professional journalism that have led to mass lay-offs in many newsrooms, the demand for journalism school places remains high, even as debate about the value and legitimacy of university-level journalism education continues internationally. So, how are journalism schools adjusting to the changing demands of an industry still in the throws of transformation?

18. Trends in Newsrooms #9: ‘Native’ advertising – the challenge to journalistic integrity. By Brian Veseling

“There used to be a very clear wall between editorial and advertising and this wall has crumbled down, and it might have crumbled permanently,” Ebele Wybenga, a journalist and author based in The Netherlands, warned a year ago. How should news publishers handle native advertising? In this ninth installment from our Trends in Newsrooms report, which is available free to WAN-IFRA and WEF members, we look at how some top publishers are approaching this controversial form of revenue.

19. La Stampa’s Editor-in-Chief ‘opens the doors’ of his newsroom. By Julie Posetti and Federica Cherubini

“It’s an exchange of perspectives and knowledge. It’s a sign of openness that has no precedent in Italy,” Mario Calabresi attests, as he explains his newspaper’s approach to reinventing its social media strategy. Calabresi is the Editor-in-Chief of one of Italy’s most recognised newspapers, La Stampa. He is pushing the boundaries of digital journalism in a country not known for media innovation.

The Financial Times stands out as a global case study in changing news media consumption, as the UK market joins the US in crossing the mobile-desktop threshhold. Around 60 percent of the FT’s online subscriber readership now comes via a mobile device, and it is being driven by increases in digital consumption at weekends, and outside core working hours.