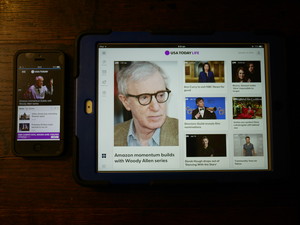 1. USA Today’s mobile app is the fastest growing piece of their business

“The Mobile is the fastest growing piece of business,” David Callaway said. “Both in terms of readership and in terms of percent growth in advertising. We’re seeing for the last 18 months readers flocking to the mobile from desktop and other digital operations but advertising is just really starting to move in the last five or six months. We’re very heavily concentrated on how we can adapt our editorial to a mobile environment.”

2. The design of the app is critical

“We’ve designed them to be very visual,” he said. Callaway explained that the number of posts is another important consideration. “We have a certain amount of stories that you can finish,” he said. “I think we have 25 stories per topic segment or channel, there’s a lot of news on the app but it’s not infinite.”

3. Content needs to be specifically tailored to mobile devices

“Most of the strategy is focused on adopting our editorial so that it will work for mobile, Callaway said. “That is beyond just photo galleries and videos like that is how we actually write the stories that work.”

“For instance, the Paris terror attacks last week. We like all media had a stories coming out, analysis and video, but we adopted a mobile strategy. Five bullet points and we called it “Paris terror attack, what we know right now. It wasn’t a story, it was just five most interesting news facts on the story updated every hour on the hour.”

“Somebody who’s on their phone maybe went to the USA Today app or to the mobile web or safari would see this and click on it and they would just have a quick summary of what the latest news was provided by the journalist. That is something, that wasn’t on the paper, wasn’t for the desktop it was just designed for mobile.”

“We’re trying to do more of those, not just on breaking news stories but at the beginning of the day, at the end of the day, kind of just short summaries for people who are on their way to work or on the bus, stealing 30 seconds of time to look at their news app to catch up on what’s going on.”

4. Short and longform pieces do equally well on mobile

“The quick content stuff really works well,” Callaway said. “But we see equal success in long form content in doing our investigative journalism pieces, in which we put up special templates that allow for long form reading along with embedded social media, embedded video… they always do well in terms of readership.”

“You literally can see different platforms have different viewing habits and different types of readers,” Callaway said. “Something that works on the iPhone doesn’t work on the Android, it’s really a learning curve. But basically for me as a journalist, trying to develop stories that work across platforms, especially on something big like the Paris terror attacks…to really focus on mobile first and then the rest of digital and video. Then we put out the newspaper at the end of the day. It’s five times as fun as it used to be.”

7. Time stamps and alerts are important.

“We feel that people who are accessing news on their apps really want to see the freshest news and we feel that time stamps help with that,” Callaway explained. “It gives it an idea of when it was published and we really focus a lot of our digital coverage on breaking news. The first with something. Lots of alerts.”

“I travel around the world, I don’t have a lot of time to go to a bunch of news websites. I want the news pushed at me. I’m a big fan of news alerts, I sign up to all sorts of competitor sites as well as our own. I want our folks to be first when they can. So having the time stamps to show when something was updated is very important.”

“We redesigned our website about 18 months ago, it was very visual and it was very successful and people really liked it and it helped traffic immediately. When we designed the app we wanted to give it a very visual feel so that everything has photos or videos tied to it. There was a scrolling news feed, as people migrated to reading the news on their mobile devices. We’ve probably updated the app five or six times since the original launch so each time we’re trying to do something a little bit more.”

9. App updates give you the opportunity to experiment

“When we first launched the app we felt that less was more. We had 15 stories on each subject. Fifteen on the front page, 15 on the money page, 15 on the sports page, and then we started to experiment.” It was after they adjusted the number of news stories Callaway said that audiences embraced the news app. “We adjusted it to 25 and traffic took off. Some of our competitors are doing infinite scrolling, we’re kind of looking at that as well. Right now we’ve got a pretty decent digestible news report the way we have it at 25.”

“We started experimenting with putting ads in the news feed, as you can imagine a lot people complained, that’s not the way people wanted to see their ads but to be honest that’s resulted in more people clicking on the ads and better revenue. We certainly weren’t the first to put the ads in the feed. But it does seem to be the way the industry is going.”

“By integrating the ads into the news feed we can solve that banner problem. We did the banners too…and they don’t perform very well. By putting them inside the news feed they perform a lot better because people run right into them, and they’re not considered wall paper they’re considered part of the feed. Indeed the engagement on the ads themselves has increased because, believe it or not, some people are scrolling through and they see the ad and they do react and they do want to hit it.”

12. Early morning, lunchtime and evening are optimal times for posting content but the news-cycle is now 24/7

“It’s 24/7, but we long ago changed our work to adapt to the digital day,” Callaway said. “The busiest time of day in the newsroom starts earlier, it starts at 7 in the morning instead of 10:30 in the morning for a traditional newspaper. So a mobile day in the US is very busy from 7 to 11am, busy at lunch time and then in the evening the tablet day kicks off so you get a burst of people who go home watching television, working on their tablets and watching their second screens. We have to have staff set up for all of that. Those are the times we’re trying to hit the publishing cycle the hardest. But generally somebody is on 24/7, we have folks in Europe and Asia who help out during the overnight hours in the US.”

13. User feedback on apps is important

Feedback left on app forums, like the Apple store, are ideal ways of gauging impact, Callaway explained. “User feedback – sometimes it’s good and sometimes it’s terrible,” he laughed. “When it’s bad we try to adapt and try to fix things that are driving the users crazy. The way that Apple has set up its review and comment system its very helpful actually for news organisations to determine what they’re doing right and what they’re doing wrong.”

David Callaway will be appearing at: