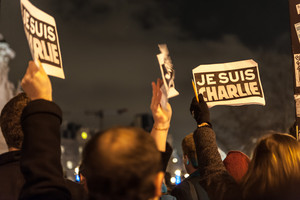 The essential role of press freedom in French culture and democracy became clear in the immediate aftermath of the horrific newsroom massacre.

Thirty five thousand people stared down fear to gather for a vigil at Place de la Republique in central Paris where citizens joined with the global journalism community to declare “Je suis Charlie!” – I am Charlie – in solidarity with the victims, the survivors and the cause of media freedom.

The attack on Charlie Hebdo was viewed as a broad attack on freedom of expression.

Concerns have been expressed about the potential ‘chilling effect’ of the attack but there is no risk of capitulation among Charlie Hebdo survivors and some of their former colleagues. Utterly defiant in the face of death, they say they will collaborate to produce the next edition of the magazine, as scheduled. It is due to be published on Wednesday.

“We have all decided, the journalists who survived and their ex-colleagues, that we are going to have a meeting tomorrow to publish the next Charlie Hebdo,” former journalist with the magazine, Caroline Fourest told Australia’s ABC Radio. “There is no way, even if they killed 10 of us, that the newspaper won’t be out next week,” she said.

Fourest said self-censorship and fear would be precisely the opposite of the approach required in the circumstances. “This is what the jihadis want. They know that this is the way. You just have to kill a few people in every country, which is the easiest thing to do in the world.”

Next Wednesday, they plan to publish one million copies of the magazine. The normal print run is 60 thousand. And they will do so with the support of their media competitors. The daily Liberation has offered office space, while the Le Monde group, and public broadcasters Radio France and France Televisions have offered editorial and financial backing to keep Charlie Hebdo alive.

France is commemorating a national day of mourning today and the country observed a minute’s silence at midday.

But silent in the face of terror, Charlie Hebdo will not be.