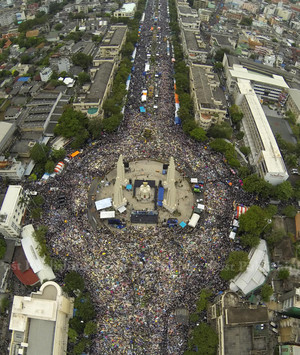 “Our aim is to get beyond hobby-grade equipment and to establish what options are available and workable to produce high quality video journalism, using various types of UAVs and camera setups,” CNN Vice-President David Vigilante says in a media release.

It is a significant step forward for the FAA, whose safety inspectors have been questioning the speed of drone use approval, and whose reports in November of last year indicated that drones pose a much greater air traffic hazard than previously recognised.

The FAA currently allows limited use of drones in national airspace for border security, research and other public (government) causes, as well as allowing public entities with a Certificate of Authorisation to use UAVs, or individuals for private recreational use.

CNN’s Cooperative Research and Development Agreement with the FAA will use data collected from the initiative to construct a framework for UAVs to be safely integrated into newsgathering operations.

“Our hope is that these efforts contribute to the development of a vibrant ecosystem where operators of various types and sizes can safely operate in the US airspace,” Vigilante says.

Mike Heiges, Principal Research Engineer at Georgia Tech in the US, which was in a pre-existing research partnership with CNN, and is coordinating with them and the FAA on this new agreement, told the World Editors Forum that the institute hopes to “investigate technologies, operating procedures, and crew skill requirements that will enable the safe and effective use of UAVs for news coverage.” The institute hopes that by sharing the data with the FAA it might accelerate fair law making on drone use.

Following the announcement of CNN’s partnership with the FAA, several other US media organisations including The New York Times, The Washington Post and Associated Press have joined with Virginia Tech to test UAVs for newsgathering.

Founder of the Drone Journalism Lab Matthew Waite told the World Editors Forum last year that it was up to journalism as an industry to put press freedom on the agenda in developing global drone laws.

Outside of the US, drones are already being used in reporting. The BBC has its own drone reporting team in the UK, where drone laws are also evolving but do allow the commercial use of drones with permission from the Civil Aviation Authority. And in the Ukraine, CBS and the New York Times have been using drones to collect footage of the conflict’s devastating impact.

“At least so far, no one has gotten hurt. No one has done anything spectacularly stupid, but it will only take one irresponsible drone accident to really hurt our chances of using these devices.”

Photo: 2013 protests in Bangkok captured by drone, courtesy of Sithikorn Wongwudthianun for The Bangkok Post.