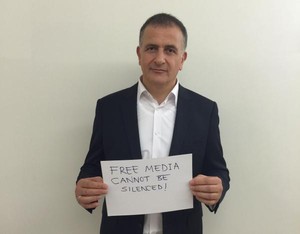 On December 14th last year, the offices of Zaman and Samanyolu TV were raided amid claims that they were conspiring with an influential cleric who has been labelled a terrorist by the Turkish Government after he criticised Turkey’s President Recep Tayyip Erdoğan.

Samanyolu’s General Manager Hidayet Karaca and Dumanlı were among dozens detained in the raids.

Karaca remains detained but Dumanlı has since been freed.

“When I was released, the people, in their tens of thousands, waited in front of the court. I was very touched when I learned that they waited for six days,”  Dumanlı says.

“Normally you would expect people to shy away from the newspaper. However, the opposite happened; our sales increased, the people supported their newspapers.”

Dumanlı denies the allegation that he defamed suspected members of the al-Qaeda affiliated group Tahşiyeciler, whose leader President Erdoğan has publicly defended.

However, he still faces charges of membership of a terrorist group, making threats and slander, and depriving people of liberty by using force. The other detainees who were referred to court face the same charges.

“They charged me with leading an armed terrorist organization on the grounds of two op-eds and one report that was published in Zaman which criticized an organization connected to al-Qaeda. The authors of these articles have been released. There is no crime.”

“Am I to be prosecuted for two columns and a news report, your honour?” Dumanlı asked the court. “Yes”, the judge replied.

“It is obvious that there is political pressure on the judges,” says Dumanlı.

Dumanlı says the Turkish media has been under intense pressure in recent years, “But the fact that democratic countries have supported freedom of the press in Turkey is of immense importance. The international response gave the domestic media courage, and it has started to report on what is being said abroad.”

Since the raids, Dumanlı has been banned from travelling abroad, Karaca has remained in prison, another two journalists have been taken into custody over their tweets, and the Cumhuriyet daily newspaper was raided after planning to publish a selection of Charlie Hebdo material.

“The Turkish media has seen a lot of pressure before, but no civilian government ever dared to exert this much pressure,” Dumanli says. “[We’re] facing repression only seen in periods that followed military coups. I don’t believe this is sustainable.”

But Dumanlı says despite an “era of fear and worry”, Turkish media has been given a kind of dynamism by the international response.

“When readers support their newspapers, when colleagues support each other, only then will journalism survive.”

Ekrem Dumanlı will be appearing at: