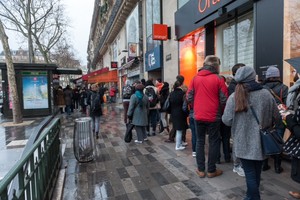 The magazine was printed in defiance of the horrific terrorist attack that killed 10 Charlie Hebdo staff and associates last Wednesday. Editor-in-Chief, Gérard Biard, said the edition had been made “with joy as well as pain”.

The first 700 thousand copies printed sold out almost instantly and ultimately five million copies will be distributed in 16 languages. The magazine’s typical circulation is just 60,000.

The Guardian’s Anne Penketh says her local newsagent in Paris was so inundated with customers wanting copies of Charlie Hebdo that he hid them and sold copies only to regulars.

Penketh said: “While I was there, a couple of people stopped by and asked for a copy, but [the newsagent] said he didn’t have any. He then stooped down and put my copy inside Le Figaro so nobody would see. He says he’s never seen anything like it.”

“It was incredible. I had a queue of 60-70 people waiting for me when I opened,” a woman working at a newspaper kiosk in Paris told The Guardian. “I’ve never seen anything like it. All my 450 copies were sold out in 15 minutes.”

The front cover of the latest edition, which is being called the “survivors issue”, depicts the Prophet Muhammad weeping and holding a sign saying “Je Suis Charlie” with the headline “Tout est pardonne” – all is forgiven.

French journalist Agnès Poirier, told BBC Radio 4’s Today programme about the queues at two newsagents in a small town in Brittany: “I’ve never seen that many people queue for a newsagents to open.”

On eBay, UK-based sellers of the magazine were attracting bids of more than £500 on Wednesday morning.

Response to the attack

The New York Times reported that as part of a broad response to the attack that 54 people are under investigation related to charges of glorifying terrorism and terrorism threats, according to Pierre Rancé, a spokesman for the Justice Ministry.

The Paris prosecutor said on Wednesday that a highly provocative French comedian, Dieudonné M’bala M’bala, had been detained as an “apologist for terrorism” because of a comment on Facebook suggesting sympathy for one of the attackers in Paris. This move has provoked a fresh freedom of expression debate, with prominent US journalist Glenn Greenwald challenging Western press freedom advocates to declare “Je suis Dieudonne”.

The latest Charlie Hebdo was published as funerals for the victims of the terrorist attacks are held. And today Al-Qaeda in Yemen claimed the attack in a video purportedly from the group, however, presented no evidence to support the claim.

On Sunday, a historic march from Republique to Nation occured where over 50 world leaders and one and a half million people attended in solidarity against terrorism and in support of press freedom.

Debate has continued over whether news publications should publish the front cover of the magazine. Some publications made the editorial decision not to publish because they feared for their journalists’ safety. This decision has been met with some criticism and debate over whether this is self-censorship and if the cover has news value for readers.

The Guardian reported that newspapers around Europe, including Libération, Le Monde and Frankfurter Allgemeine, have used the image online. The BBC showed it briefly during a newspaper review on Newsnight. In the US, The Washington Post, USA Today, LA Times, Wall Street Journal, The Daily Beast and CBS News ran the cover but The New York Times did not. In Australia, the ABC showed the image of the cartoon on its 24-hour rolling news programme but with a warning to viewers. The Guardian said it is running the cover as its news value warrants publication.

Omar Belhouchet from Algeria’s El Watan newspaper said in a Journalism after Charlie event today at UNESCO that he would not put his journalists at risk by publishing Charlie Hebdo cartoons depicting the Prophet Muhammad. “I know my country and these are risks I won’t take with my own journalists. Secularism is a beautiful French invention. But in our societies, many countries do not respect press freedom and when papers try to produce credible investigative journalism – even talk about religion – these news papers are clamped down on by states who are represented at UNESCO. In many North African countries and Arab States the [media] legislation is very repressive.”

WAN-IFRA has decided on this occasion not to directly publish a picture of the current Charlie Hebdo cover, however it can be viewed here by those who choose to click through.

Today, Hurriyet Daily News reported that police raided the printing press of Turkish daily Cumhuriyet as it prepared to distribute a four-page selection of Charlie Hebdo’s new issue in an act of solidarity. Cumhuriyet Editor-in-Chief Utku Çakırözer stated earlier that they had decided not to publish the cartoon on the cover

“When preparing this selection, we have been attentive to religious sensitivities as well as freedom of belief, in line with our editorial principles,” Çakırözer said via Twitter yesterday. “We didn’t include the cover of the magazine after a long deliberation.”

Speaking later to private broadcaster CNN Türk, he said the police raid was ordered by a prosecutor in line with the Turkish press law.

“The prosecutor then saw that the content does not violate any laws, so he allowed the trucks to leave the printing press for distribution. It shouldn’t be like this,” Çakırözer said, adding that “free speech should be defended by the whole of society.”