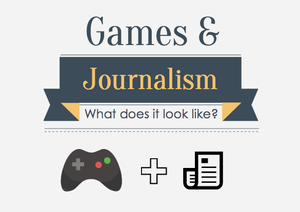 In 2014, an investigation into illegal fishing practices off the coast of Sierra Leone by Al Jazeera journalist Juliana Ruhfus brought over 80% first time users to its website. What was unique about it? Pirate Fishing – originally a two part investigative feature – is a game allowing users to enter the story as a participant and help research it.

It’s part of an increasing trend, where news rooms are exploring the possibility of using gaming elements in storytelling.

“When somebody mentioned gamification and we all started reading up about it, it was like somebody switched a light bulb on,” Rhufus said. “It just matched a lot of what we do on location.”

Rebuilding Haiti, a game funded by the European Journalism Centre, explores these concepts. Following the ‘choose-your-own adventure’ format, users are faced with a number of decisions post 2010 earthquakes. Do you invest money into schools? Free health care? Or prioritise relocating the homeless? Game developer Florent Maurin explained that the choose your own adventure format allows the user to understand the complexities of development work. “The main problems that Haiti is facing is that a lot of things are made for beneficial short term consequences but the downside to that is that the long term consequences are very bad and terrible for the country,” Maurin said.  “So we wanted the people to make mistakes and choose things they thought would be right at the first time, and understand that what is right in the short term can end up very wrong in the long term. So that’s why we decided to follow this choose your own adventure game design.”

Virtual reality is another concept being explored by newsrooms and journalists. Leading this charge is Nonny de la Peña, a pioneer in what she calls “immersive journalism,” which uses virtual reality technology to allow users to enter into stories. Users witness events in real time as they walk around a scene in virtual reality goggles. Originally a documentary film maker, de la Peña explained that the experience has a much deeper impact on user experience than traditional storytelling techniques. “I feel like I get stronger reactions now in the pieces that I build in VR than I did in even the most powerful of my documentary films,” she said.