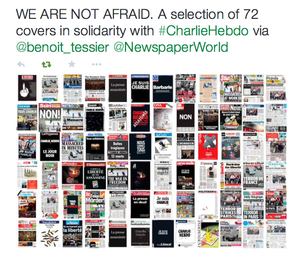 A strong spirit of unity in defence of press freedom was in evidence in the editorial published jointly by the Europa newspaper partnership. “We continue to inform, to inquire, to interview, to comment, to publish – and to draw – about every legitimate subject,” the group editorial reads. It was published by France’s Le Monde, The Guardian, Germany’s Süddeutsche Zeitung, Spain’s El Pais, Italy’s La Stampa and Poland’s Gazeta Wyborcza.

While warning that it is extremists, not Islam itself, who should be the targets of loathing in response to the attack, the UK’s The Independent celebrated the bold, provactive journalism of the slain writers and cartoonists as a symbol of freedom of expression: “…it would not be an exaggeration to call them martyrs.”

While the Financial Times’ editorial was in step with other major newspapers, it also published a controversial column by the FT’s Europe Editor, Tony Barber. He called Charlie Hebdo’s editorial stance ‘foolishness’. “If the magazine stops just short of outright insults, it is nevertheless not the most convincing champion of the principle of freedom of speech. France is the land of Voltaire, but too often editorial foolishness has prevailed at Charlie Hebdo.” He does not condone the murderers’ actions and believes freedom of expression should be extended to satirical portrayals of religion. “It is merely to say that some common sense would be useful at publications such as Charlie Hebdo, and Denmark’s Jyllands-Posten, which purport to strike a blow for freedom when they provoke Muslims, but are actually just being stupid.” He questions what impact the attack will have on the political climate and in particular the fortunes of Marine Le Pen and her far-right National Front.

The New York Times’ editorial defended the universal human right to freedom of expression. “This attack was an assault on freedom everywhere.” They urged news organisations not to let terrorists dictate the standards of democracy out of fear. “This is also no time for peddlers of xenophobia to try to smear all Muslims with a terrorist brush.”

The Washington Post argued that media organisations need to continue their commitment to resisting intimidation by Islamic extremists – or any other movements that want to stifle free speech through violence. And the editorial called on France to re-examine its policies for protecting journalists. Their main point was that media organisations must not be silenced. “Equally important is that media across the West refuse to be cowed by violence” and “Such acts cannot be allowed to inspire more self-censorship — or restrict robust coverage and criticism of Islamic extremism.”

Editorial: Charlie Hebdo stands solidly for free expression. The West must do no less. http://wapo.st/1DyFMQo  via @PostOpinions

Charlie Hebdo stands solidly for free expression. The West must do no less.

The magazine doesn’t self-censor. Neither should the rest of the media.

200 people are talking about this

USA Today called the Charlie Hebdo victims heroes and martyrs of Western values, including the right to practice free expression in the face of death threats. “The idea that Charlie Hebdo satirists should die for speech just because it’s offensive is an outrage.” The editorial continued: “The satirists might be unlikely heroes, but they are heroes nevertheless — martyrs to that most fundamental of Western values, the right to free expression, which they chose to exercise despite threats and a firebombing just three years ago that might have muted others.”

In Australia, The Age editorial supported media freedom and backed the judicious publication of content if it aids the reader’s understanding. The Melbourne-based newspaper supported Charlie Hebdo’s commitment to accountability. “The journalists of Charlie Hebdo believed, as we do, that is important to hold people and organisations accountable for their actions. Their murder should be denounced by all freedom-loving peoples.”

South Africa’s Mail and Guardian declared “Let us all be Charlie – a new byword for global solidarity against the tyranny of fear”, pointing to a revived spirit of defiance in response to terror attacks in evidence in the recent Sydney seige and now in full force in France.

Charlie Hebdo on the front page

823 people are talking about this

Cartoonists from around the world have displayed their solidarity with the victims, and the freedom of expression cause, by producing cartoon tributes. Le Monde, the BBC, Buzzfeed, The Telegraph and Al Jazeera curated some of the best of these.