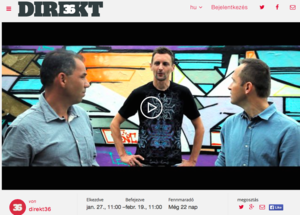 For the past six months, former senior members of Origo Gergő Sáling,András Pethő and Balázs Weyer have been developing their new website for investigative journalism, Direkt36, in preparation for its launch in February.

The idea for the project was sparked by Sáling’s dismissal and the following resignation of nearly half of Origo’s newsroom, after a stand-off on a story which revealed frivolous spending by the Hungarian Prime Minister Viktor Orbán.

Read the full interview with András Pethő on the Direkt36 project below:

The state of investigative journalism in Hungary

While heavily funded investigations can take up to one year in the US, in Hungary, access to funding is limited and the court system’s archives are off-limits to journalists. “In Hungary, if you can spend 6 weeks on a story that’s something nobody else can afford,” says Pethő.

“When I worked for the Washington Post I had the luxury of working on a small-scale project story for 5 months. There, you take a story and go into it very deeply. Then you build a method with a strategy and execute it. It takes a lot of data work, which can be a very powerful tool.”

Referring to accountable and transparent news, Pethő says: “I think the past few weeks have shown that there is a strong hunger, a strong appetite for information”.

Direkt36 hopes to encourage audience contributions and cross-border collaboration in its investigations.

“Such collaborations can be very powerful,” says Pethő. “I collaborated with [the Investigative Consortium of Investigative Journalists] to work on the Luxembourg leaks. What was simply professionally amazing is how much I could learn through collaboration with dozens of other international journalists. This made it possible to tell a very powerful story that a news organisation wouldn’t have been able to achieve alone.”

“I don’t know if you’ve been following news about Hungary in the past 6 months,” says Pethő, “[But] there was sort of a campaign or quiet crackdown against NGOs which criticised the government’s work. We aren’t saying this [will necessarily] happen to us. If we are doing the job well we will be ready for conflicts with important people, that is a part of our job.”

Prime Minister Orbán recently declared he wants to abandon liberal democracy in favour of an “illiberal state”, rewrote the country’s constitutional and electoral laws, and appointed party loyalists to ostensibly independent institutions – including the offices of the Chief Prosecutor and the Central Bank. The changing political landscape and evolving international conflict between the East and the West makes it difficult to apply the West’s democratic, traditional model of investigative journalism to Eastern Europe.

In Eastern Europe, where the government acts as a chief regulator and sponsor for media, collaborating with large media outlets can be risky. In Russia, for instance, the television is exclusively state-owned. This restricts older generations, who tend to refrain from using online media platforms and so have less access to independent information.

Yet refusing support from the government creates financial hardships. Despite collecting over 12,000 Euros in 5 days, crowdfunding is not a viable long-term solution. Pethő says: “I hope that we find [alternative] sources – maybe international organisations and private donations, participating in cross-border projects, selling some services like research and giving training.”

“We get the same question every time: ‘Why do we do this? It won’t make a difference.’ I think holding the powerful accountable is a basic necessity for journalism. It’s like asking a doctor why he’s helping a patient who will eventually die. We’ll all eventually die. For a healthy democracy this kind of journalism is indispensable – you go in and ask hard questions, and when you don’t get the answers you push even harder.”

Pethő reveals Direkt36 is considering investigations across foreign policy, how public money is spent, how EU funds are distributed, the conflict between Russia and the West, and the Hungarian government’s increasing alliance with Russia. He said: “To answer such questions you need investigative methods. They are big issues and I’m not saying we’re going to answer them quickly but we’ll try.”