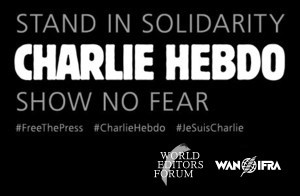 These figures represent the number of journalists who have died each year from 2009 through 2014. More than 1,100 have been killed in the line of duty since 1992 – and these are some of the most conservative estimates.

Charlie Hebdo and France are mourning the murder of 10 journalists and two police officers as the new year begins. There will, sadly and with certainty, be more as the year unfolds. When journalists are murdered, it is our entire society that should feel the wound. Is this recent attack the one that will finally wake everyone up to the fact that an attack on a journalist is an attack on us all?

Shocking as it is, the fatal attack on the newsroom of Paris’ leading satirical news weekly is not an isolated incident, but rather an extreme example of the brutal, often violent reality for thousands of news professionals worldwide.

Speak to newsmen and women in Yemen, Syria, Iraq, Pakistan, Mexico, and countless other countries, and the shock and fear that has stunned France is all too familiar. That this attack happened in a country that, while struggling with its multicultural identity, is nonetheless committed to believing in difference and diversity —  liberté, egalité, fraternité — is a tragic blow for those determined to celebrate these values.

What is exceptional in this instance is that the climate of hatred that fuels attacks on journalists worldwide has reached the heart of European newsrooms.

As we grieve, and as the reasons unfold and the story develops, I hope it will deeply register in the minds of ordinary Europeans just how precarious our freedoms have become; that anyone, anywhere, should be killed for exercising their right to freedom of expression is a travesty. Whether it is Paris, Sana’a or Baghdad, there is no exception.

Only in solidarity can we hope to withstand assaults like this. But the reality – based on the lack of reaction to countless other tragic slayings of journalists over the years – is that until it happens in your own back yard, it often goes unregistered as being a threat at all.

Wednesday’s attack strikes at the fabric of democracy, and aspiring democratic societies, the world over. An attack on a publication like Charlie Hebdo – unafraid, imperturbable, unwavering in its acerbic political satire and penetrating social commentary – is intended as an attack on the values our societies uphold. That we are no more damning to others as we are to ourselves is a philosophy that has kept Europe at peace since World War II and in some ways has become the ultimate measure of our progress. Learning to respect difference yet providing no exception to the rule that “I may not like what you say, but I shall defend to my death your right to say it.”

Perhaps never has a phrase held such poignancy.

This attack also looks to rip open the continent along fault lines that are wearing increasingly thin. Any fundamentalist thinking – right wing, left wing, economic, cultural or religious – will seek to exploit the perceived fragmentation of Europe and drive its people back into the cauldron of bitterness, hatred and sectarianism that pockmarks our history.

Europe survives precisely because of its diversity, its differences. Any dogma – religious, economic, political or otherwise – that seeks to impose a single vision on European society, especially through violent means, is destined to be rejected.

And where this belief wavers, where attacks aim to wear thin the resolve, the press has a responsibility to remind Europeans of their past and to project a potential future according to the values that so many fought and died for prior to the birth of the modern continent.

Attacks such as yesterday’s aim to exploit the fears that difference in religion and culture bring. We must not let this be the case. We should be careful not to react with calls for tighter legislation that can be harmful to the very freedoms a critical press is designed to protect. The lessons of our American cousins and the post 9-11 Patriot Act as a response to terror should remind us that threats to our freedoms can come from many directions. Let us take the time to react, but let us first take the time to mourn this latest attempt on our freedom.

We can neither predict nor prevent the actions of crazed fundamentalists, but we can entirely control our reaction to their devastating acts. In the face of this most recent tragedy we must reject the fear it was calculated to spread. The victims were martyred, not in the name of a prophet, a cause, or a twisted religious belief, but by a warped vision of our own world. We have a duty to those who died to resist that vision. They lived in the name of freedom, and died its truest practitioners.

WAN-IFRA – The World Association of Newspapers and News Publishers