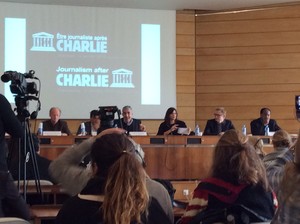 UNESCO Director General Irina Bokova opened the event by reading out the names of the 17 victims of last week’s Paris terrorism attacks. “The attack against #CharlieHebdo was an attack on freedom of expression whose flagbearers are journalists,” she said.

Le Monde’s cartoonist Plantu told the packed grand hall: “All the cartoonists in the world are able to make bridges with the other religions and nations and views…We must continue. It’s our job.”

By the time the UNESCO meeting began, the first edition of Charlie Hebdo to hit the streets since the terrorist attacks had already sold out. Seven hundred thousand copies from the initial print-run disappeared within 10 minutes early this morning, and over four million more copies will be printed in the coming days.

The rising threat to the safety of journalists in a globalised media landscape, including beyond conflict zones, begs the questions: How should the international community respond to enhance journalists’ safety and end impunity? What is the role of journalists in these circumstances? How can we maintain free media? And what’s the role of new media in all of this? These were the key questions considered by journalists and NGO representatives on a panel that followed Plantu’s address.

Newsweek‘s Middle East Editor, Janine Di Giovanni told the gathering: “The events of last week were horrible. To journalists and the entire community. Maybe it was a wake-up call to all of us? We need protection. I need to ask all of you how can you help me to keep doing my job?”

“It all came to a head for me in September when my dear colleague Steven Sotloff was brutally murdered. I can’t write any more obituaries. It’s just too painful.”

But Pen International’s John Ralston Saul reminded the audience: “The vast majority of journalists killed each year are not being killed by Islamists. The major problem for us is impunity. There are many countries were journalists are imprisoned and there is an impunity problem where it shouldn’t be…(in places like) Russia and Mexico.”

He also challenged: “Last Sunday we saw a march where many leaders whose countries imprison journalists were present. Well, what are they doing at home?! Did they just come for a walk?”

That was a point echoed by Ernest Sagaga from the International Federation of Journalists. “What happened in Paris last week was the worst in Europe, not the world. Last year in Mexico a journalist was killed live as he was presenting his program on the radio.”

“What did surprise me that this happened at journalist office that’s been attacked in the past. When I heard how many people were killed, I was surprised”, Sagaga said.

Ralston Saul also pointed to the risks to press freedom associated by government’s wanting to look tough on terrorism in the aftermath of the Paris attacks. “I get very worried when we start declaring ‘war’. The war on terror hasn’t worked. The security services take power. They will start taking over freedoms and rights. It’s a trap. The easiest way to show that you’re doing something is to limit freedom of expression.”

What is to be done?

Giovanni asked: “How do we implement practical solutions? Once a press card protected you. But now it means absolutely nothing. What practical steps can we take?” And Ralston Saul answered: “You go into these countries and then say ‘we’re going to ruin your reputation. It’s not about shouting at them it’s a matter of saying we are going to talk to our governments about you. All international organisations have become complicit. If we don’t act on Turkey, if we don’t act on Mexico, then it’s a message to the extremists that we’re just going to let it happen.”

While journalists on the panel talked about the need for boldness, Omar Belhouchet from Algeria’s El Watan newspaper said he would not put his journalists at risk by publishing Charlie Hebdo cartoons depicting the prophet Muhammad. “I know my country and these are risks I won’t take with my own journalists. Secularism is a beautiful French invention. But in our societies many countries do not respect press freedom and when papers try to produce credible investigative journalism – even talk about religion – these news papers are clamped down on by states who are represented at UNESCO. In many North African countries and Arab States the (media) legislation is very repressive.”