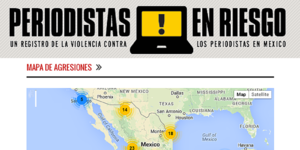 Periodistas en Riesgo (Journalists at Risk), maps exhaustively each attack against a journalist reported to the site and verifies the claim, and then adds it to a database so that journalists can see the trends and dynamics of attacks in Mexico.

Garza says that by giving journalists at a local level a picture of the specific types of attacks they face, it allows them to make better security plans.

“If you know your threats based on your past history, then you know what to protect yourself from,” says Garza.

The International Centre For Journalists and Freedom House, who are coordinating the Journalists at Risk project, hope that the project can be a model to be launched in other countries.

Already the Director of the Knight International Journalism Fellowships Program Jorge Luis Sierra has launched a similar project successfully in Iraq. Garza says there are also efforts to start similar programs in Venezuela and Central America.

“In any country journalists are grouped together in associations or networks or unions, or you know, just groups, and so those groups can come together and launch a tool like this in which they help each other to document and follow up the attacks against them.”

The map pin points in great detail each attack, and Garza and other editors use public reports, witnesses, colleagues and the victims themselves to verify information.

For example, the incident report of the infamous kidnapping and murder of the journalist María del Rosario Fuentes Rubio from Valor por Tamaulipas last year documents each aggression made against her, reports that a digital account was penetrated, documents the time and location, and gives a summary of the incident. Each of these aggressions then links to a category of similar aggressions and their incident reports. These are marked as verified or unverified and each leads off to supporting or additional documentation.

The incident report also documents whether there has been any follow-up from authorities, and any developments on the incident.

“By building a database you can do all kinds of searches. So you can search: ‘Where is the region that reporters are most likely to get beaten by the police’, then you get all the cases, then you can filter the region or type of coverage,” says Garza. “You can see where the regions with the most frequent attacks are against buildings of news organisations, for example; as it happens a lot in Northern Mexico when media organisations come under fire from drug cartels.”

The site also aims to be a broader resource for journalists. It provides documents and training manuals from journalistic organisations, a directory of organisations which can support journalists at risk, and has partnered with an NGO which gives legal advice and provides a live legal clinic to journalists and human rights defenders.

Though the project is new, Garza says it has been well-received by journalists, and has not yet faced any backlash.