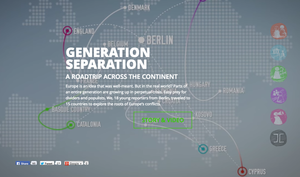 Eighteen reporters, who were divided into five teams, went to different countries equipped with cameras, smartphones and laptops. They wanted to document what people thought of the European ideas of democracy, freedom and prosperity. They used video, text and social media to conduct interviews and engage readers.

The videos are filmed in particular countries that are representative of the problems facing Europe, such as right-wing populism, the economic crises, independence, discrimination and ethnic conflicts. The reporters wanted to explore why fewer and fewer people see the European Union as the solution to their national problems.

Nehf and Güclü were part of the “enemies” and “independence” teams respectively.

“We wanted to let the people talk, not only politicians. The best way to present what we found out along the way was through video and we wanted to (create) live coverage.” Nehf said.

Video and social media used to tell the story

“Video is something very direct. People act in the very moment, you get a feeling for the protagonists. And images are very strong,” Güclü said.

“The social media aspect was important because it was the only direct link to people who were following us – via Twitter, via Facebook, or Instagram. They could always see what we were doing in the very moment. We wanted to have this live coverage as something that really makes users part of our trip during those ten days,” she said.

Nehf said the reporters wanted the project to include the local people because they live with the situation. He said the reporters were only spending a couple of days in each country and wanted to give people the opportunity to have their say. The local contacts helped them set up other interviews and those people could share information on social media.

“In the end we found so many places and so many stories that are not fitting to the European idea that politicians still repeat and repeat. This split between the politicians’ image they transport and what we found out, was often pretty obvious,” said Nehf.

The teams had to conduct research, establish contacts and organise interviews before they left for the countries because they only had limited opportunity to talk to people.

“It was very worth it doing the whole research before. And the social media aspect paid off as well because we reached a lot of our protagonists via social networks while we were investigating,” said Güclü.

The reporters are now planning to create a weekly two-page series for the German newspaper Die Welt Kompakt where they can use print-based news articles to continue to tell other stories they collected, also with a more German focus.