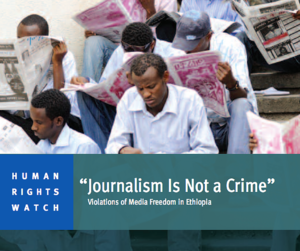 Over the past 12 months, six privately owned publications closed after government harassment; at least 22 journalists, bloggers, and publishers were criminally charged, and more than 30 journalists fled the country in fear of being arrested under repressive laws, according to the report.

“The year leading up to Ethiopia’s May 2015 elections should have been characterized by a vibrant and independent media contributing to the exchange of information, ideas, and perspectives on issues relevant to Ethiopian citizens of all political persuasions,” says the report.

“Instead, private publications have closed down and two dozen [of] Ethiopia’s private journalists and bloggers are in prison, unable to contribute in any way to the political discourse that will shape the credibility of the elections in May 2015.”

Additionally, state-run media have run propaganda against publications which are critical of the government. One case from the report details a documentary aired by the Ethiopian Broadcasting Corporation which names five publications as mouthpieces of terrorist organisations. The owners of the publications said as a result freelance journalists became unwilling to work for them, it became increasingly difficult to find printers and distributors, and their sales and advertising declined.

A former resident of Addis Ababa says in the report: “I used to be a regular reader of Afro Times [one of the targeted publications] but after the documentary when they said it was supporting terrorism, I was afraid to be seen buying it or reading it. I knew it wasn’t true but that doesn’t matter in Ethiopia.”

Journalists face resistance at every front: sources are reluctant to speak, the only printer with the capacity to print daily news is state-owned and regularly delays or refuses publications; new media, including Ethiopian-run blogs are blocked; and journalists and their families face threats, arbitrary detention, physical violence and exile.

Ethiopia now has the most journalists in exile of any country in the world other than Iran.

The international community has condemned the government’s mistreatment of journalists, particularly in relation to Ethiopia’s Anti-Terrorism Proclamation, which is frequently used to justify actions against the press.

The report recommends that Ethiopia’s government “amend repressive laws used to target the media, including the Anti-Terrorism Proclamation.”

During Ethiopia’s 2014 Universal Periodic Review, the governments of South Korea,
Germany, Chile, Canada, Denmark, Switzerland, France, Belgium, Czech Republic, Slovenia, Australia, and Austria all recommended that the government of Ethiopia “guarantee genuine freedom of expression to all political leaders and the media, in light of the next elections” and several states called for reforms of the anti-terrorism law.

However the United Kingdom and the United States did not raise freedom of expression concerns.