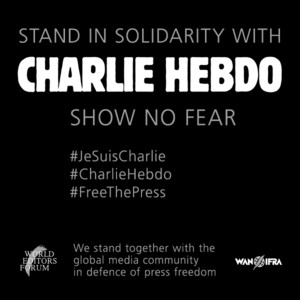 “We condemn in the strongest possible terms this outrageous atrocity and stand together with the Charlie Hebdo team and the entire journalistic community in France in demanding justice for the victims,” said WAN-IFRA CEO, Vincent Peyrègne.

“With 61 journalists killed in 2014 and the New Year beginning under such horrific circumstances, we are reminded that an attack of this nature strikes at the heart of the very freedoms that the press in France so passionately defends. It is not just an attack against the press, but also an attack on the fabric of our society and the values for which we all stand. This should be a wake up call for all of us to counter the rising climate of hatred that threatens to fracture our understanding of democracy.”

According to early reports, two heavily armed men entered the offices of the Paris-based weekly satirical magazine and opened fire. Shots were reportedly exchanged between the attackers and police as the two men made their escape. French President Francois Hollande has since confirmed that amongst the dead are journalists and police officers.

The incident has been officially called a terrorist attack and the French capital remains on high alert, with armed police guarding the offices of news organisations across the city.

Today’s incident follows an arson attack in 2011 that destroyed the publication’s then headquarters, located in Paris’ 20th arrondissement. The magazine has been defiant in continuing its critical satirical line despite subsequent threats.