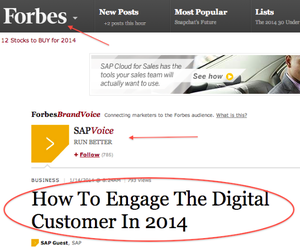 Harold Evans, the respected former editor of the Sunday Times, UK, weighed into the native adversting debate. In an interview on BBC Radio 4 he said: “fashioning ads so they look like editorial is the real danger. I think that any editor has to ask himself all the time: ‘would I be running this if I wasn’t paid for it?’ If the answer is no, then he shouldn’t sell his soul and lose the paper’s credibility.”

The Guardian’s columnist Simon Jenkins said he cringed when he saw “sponsored content” supplements full of “advertorial”. He deemed “newspapers [an] institutionalised hypocrisy”, listing examples such as  The Independent, the Times, the Telegraph and the Guardian itself. Despite this, he believes that advertising is the media’s best bet in the face of a growing need to maintain a healthy democracy. “There is no question that the private sector is an insecure way of financing a free press that does not make money. But all other ways are worse.”

Native advertising is a positive alternative or counterbalance to state-funded media, creating a larger degree of internal freedom and flexibility for editorial content. “Newspapers and broadcasters still have the resources and skills to digest, process and transmit masses of information in such a way as to hold the faith of readers. That is a vital democratic construct,” Jenkins concludes in an column published for the Guardian earlier this week.

Sponsored content has been increasing substantially over the last few years: In 2015, approximately two-thirds of marketers surveyed by the US Association of National Advertisers said they will increase their native ad budgets. Market research firm Statista predicted a $4.3 billion investment into native advertising in 2015, which it expects to more than double to 8.8 billion in 2018.

In an interview with WAN-IFRA, Wybenga says that in early experiments, the distinction between advertorial and editorial was more obscure due to a lack of newspapers’ experience with advertisers. This led to the media’s fear that readers would be indignant, should a native ad be clearly labeled as such.  The most damaging example was the scandal at the Atlantic Monthly in 2011, when the news outlet published an advertorial sponsored by the Church of Scientology. The label indicating that the article was in fact a native ad was scarcely visibly, which “caused mayhem among readers and a storm of criticism on twitter”, says Wybenga. Since then, the Atlantic Monthly has recovered its credibility and native advertising remains a key counterpart to its business model.

The increasing scrutiny of readers has encouraged greater transparency in the execution of native ads and most news organisations have introduced transparent guidelines for use of sponsored content. “In the ideal situation, the newspaper would say which native brand and which journalist are behind the native ad and it would have some kind of disclaimer to show that it’s sponsored by a brand and isn’t part of regular editorial content,” says Wybenga. Increasing competition between media organisations and brands has accelerated the progress of native advertising practices.

One of the core principles which can benefit both a brand and its partnering newspaper is credibility. The key to success is  a liaison between a newspaper and a brand whose product is relevant to its readers’ interests. This way, the ad has potential to be presented in an engaging way, which not only complements the newspaper’s editorial content but also engages with and respects the readers’ interests.

By employing this approach, the newspaper is able to not only meet its advertiser’s needs but strike a balance between its editorial integrity and financial needs. The native advertisement must be executed in a way that fits both the editorial’s style and content. By presenting the native ad with a tone of confidence and commitment to the cause, a newspaper can thus uphold both the brand’s and its own credibilities. Quartz and Monocle are good examples of successful partnerships.

These news platforms liaise with premium brands chiefly concentrated in the business industry- a field which is relevant to the organisations’ editorial content. They pay careful attention to their readers’ and brands’ interests by weaving the native advertisements seamlessly into their content.

Nevertheless, every new enhancement on the native advertising market creates new dilemmas for the media. The risk of running a native ad which is too compatible with a news outlet’s editorial content is obscuring the line between advertorial and editorial.

According to Wybenga, it is still the surest way to avoid making ads appear intrusive and irksome to  readers. “If it’s not a slap in your face when you encounter a native ad then it may very well work”, he says.

Wybenga also draws upon negative examples of interspersing editorial content with native ads: “things become murky when you hire staff exclusively for advertorial content. At Conde Nast they employ journalists to write for the Editor-in-Chief as well as the advertiser. This is where the slippery slope becomes transparent. Another example are glossy magazines such as Vogue, which would run lengthy interviews with Cartier for advertising purposes.”