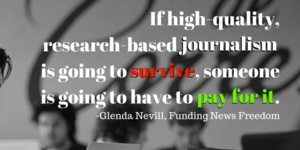 The blueprint for funding 21st century journalism is still being drawn. The details are sketchy, but it is clear the current model is hopelessly out of date and out of touch with the reality of digital evolution. The upheaval has paralysed some media houses and given others the impetus both to revisit not just how journalism is practised, but to reinvent the whole concept of news, how it is delivered, and how it is funded.

Julie Posetti, an Australian journalist and journalism academic from the University of Wollongong, is Research Fellow at WAN-IFRA in Paris, says that the global publishing industry is in the midst of a “seemingly never-ending stage of upheaval and reinvention” when it comes to journalism business models.

“The shift from reliance on the traditional advertising model has been slow and painful in some sections of the industry, with Western developed countries, in particular, suffering a huge blow as the tidal wave of convergent crises hit. These include the collapse in advertising, the rise of interactive digital media, and reducing trust in journalists following various scandals. The impacts have included the closure of many publications and the sacking of more journalists globally,” she says.

But this is a period of transition in which new forms of journalism and publication methods are being developed, along with new business models. “We don’t know yet what a sustainable 21st century news business model will look like, but it is likely to involve a combination of philanthropic backing, crowdfunding, collaborations between journalists and non-profit organisations, universities, and traditional advertising,” Posetti says.
There are three things we do know for sure, she says. “Firstly, there remains a very strong appetite for investigative journalism in the public interest. Secondly, video drives advertising sales (and traffic), and thirdly, this is an evolutionary process.”

While the appetite for investigative journalism might be strong, it isn’t always sated by a matching investment in the labour-intensive and expensive craft.

Francois Pierre Nel, director of the Journalism Leaders’ Programme at the School of Journalism and Media at the University of Central Lancashire in the UK, says that tying the future of journalism to the future of legacy media organisations “would be a mistake”.

He believes there are several reasons why investigative journalism has a bright future. “Traditional media companies, struggling to find ways of distinguishing themselves in the intensely competitive digital landscape, are increasingly establishing hubs to work data-driven content, including investigative reporting. Investigative efforts are being funded by concerned individual philanthropists and groups.”

In South Africa, the respected Mail & Guardian newspaper has a separate centre for investigative journalism, AmaBhugane (which means “dung beetles” and which led to its quirky tagline, “Digging dung. Fertilising democracy”). Founded by Stefaans Brummer and Sam Sole in 2010, it has been responsible for some powerful stories, including investigations into massive state spending of R246 million ($22 million) on President Jacob Zuma’s private home in Nkandla, KwaZulu-Natal.

Brummer says AmaBhugane, by necessity, has an arm’s length relationship with the Mail & Guardian. “There’s a misconception that the M&G owns AmaBhugane, which creates problems. AmaBhugane is a non-profit, and cannot be owned by anyone.”

Donor funding supports AmaBhugane. The M&G pays just one-third of its costs, which mainly goes towards salaries. The operation has 12 staff members, including three interns. It has three main pillars: investigations, advocacy and skills transfer.

“We set out to create conditions in which investigative journalism could thrive,” says Brummer. “We operate on a budget of R8 million ($754,658) and are supported by six donors, other than the M&G.” These include

The Claude Leon Foundation, says Brummer, pays AmaBhugane’s legal costs – not for defending their stories, but rather for advocacy work such as challenges to the Public Access to Information Acts. In the case of Nkandla, the unit went to court to access more than 12,000 pages of documents that helped uncover the scale of state spending on the president’s home. But it cost over R700,000 ($66,031) to get the documents.

Posetti says that in many cases, donor funding can be precarious. “There is no doubt that we are facing a more vulnerable future as individual journalists and publications – more akin to the experience of artists, start-ups, community organisations and theatre companies. But as the need and demand for quality investigative journalism continue, we will find a way to keep producing. ‘We are like the proverbial cockroaches’, said Janine Gibson, editor-in-chief of The Guardian’s online operation in the US, when asked about the future of investigative journalists, in an interview for the Trends in Newsrooms report. I think she’s right. And the result of this precariousness may also result in highly creative, innovative journalism.”

The success of De Correspondent would certainly fit the mould of creative, innovative journalism. The Dutch online newspaper is entirely funded by its readers, or rather “members”, as the title prefers to call them. Its founders, Rob Wijnberg and Ernst-Jan Pfauth, were both editors at a newspaper in Holland. Wijnberg, then editor of NRC Handelsblad, in the face of free online media, wanted to move the editorial focus of the newspaper from “news” to “new”. “New,” says Pfauth, meant “reporting on the kinds of developments that are less spectacular than most news events, but that do have a large impact on our daily lives.”

To make it happen Harald Dunnink from creative agency Momkai said he could build a platform for a cost price if 15,000 people paid at least €60 ($80) each via a crowdfunding campaign. Wijberg wrote a manifesto in which he promised to “uncover, explain and highlight deep-lying structures and long-term developments that powerfully shape our world, rather than speculating about the latest hype, scare, or breaking news story”. He appeared on TV and in eight days raised €1 million ($1.3 million) to fund the venture. De Correspondent launched in September 2013, with 20,000 members and now has nearly 34,000, each paying €60 ($80) a year. The site is free of advertising. This approach – analysis, background pieces and investigative reporting – had found favour with many readers of NRC Handelsblad’s under Wijnberg’s editorship, so much so that many cancelled their subscriptions when Wijnberg left, and became founding members of De Correspondent.

Germany’s Krautreporter soon followed. Describing itself as a daily magazine telling stories behind the news, it is “ad-free, made for the internet and founded by its readers”. The writers, around 30 journalists, say they “no longer want to wait for big media companies to allow true journalism on the net. We are all working for years as journalists with great commitment to the established media. And we believe: now it’s time for something new”. They met, and exceeded, their goal of 15,000 investors contributing €5 a month ($6.60), or €60 ($80) a year. In July, 17,545 investors had contributed to their crowdfunding cause.

Contributoria.com, born out of a Google/ IPI news innovation competition, is an independent journalism community whose members collaborate on all aspects of the writing process, including commissioning, editing and publication. Sarah Hartley, one of the founders, says: “In the team, we describe it as a community crowdfunding model. Externally, we’ve also been described as the offspring that would result from Kickstarter and Medium.”

Members join the platform and their fees contribute to a funding pool. Writers propose story ideas, which are moderated, and the community chooses which pitches to fund each month. The successful stories are published in Contributoria’s magazine, but can also be sold.

Hartley, with The Guardian’s Matt McAlister, and Dan Catt, one of the developers of Flickr, founded Contributoria to “utilise the opportunities technology provides for group action and support in the interest of quality journalism”. It went live in January 2014.

“The first challenge was being able to explain the concept to people. The whole idea of crowdfunding was less familiar to people when we first started developing the idea in 2009-10,” says Hartley. “It wasn’t as much a technical limitation as a cultural one. The different methods that technologies have made possible was something more familiar to the tech world than to the rather risk- averse environment of journalism.

“The most recent challenge has been the introduction of the payment mechanism to allow members of the community to get involved in the ongoing funding of the platform. This launched in July and was a major landmark for us in terms of both technical development and our future financial security.”

“These include sponsorship of particular magazine editions; so far we’ve partnered with organisations such as the United Nations Development Programme and the International Press Institute.”

Matthew Buckland, a South African digital media entrepreneur, online publisher and owner of digital agency Creative Spark (which publishes Memeburn, Ventureburn and Gearburn), believes “advertising will still be a key revenue stream for most commercial media companies in the future”.

“I think it’s a mistake to think that print titles will wane in the face of the digital revolution. I argue they will do just the opposite. As a result of digital information overload and too many choices, I predict print will see a big comeback and it is a good business model for certain niches and publications.” Buckland says digital publications are still searching for “an optimal online advertising model”. A resurgence of print and an improvement on the online advertising model “should see an improvement for the media industry in general”.

As Posetti says, the funding models of the future are in a trial-and-error phase. “But in that process we are starting to see pat- terns emerging that should help guide the development of business models − such as the trend to the very short and live, and the very long and deep as sustainable forms of journalism.”

Photo courtesy of the Index on Censorship Magazine.

NOTE: This article was Originally published by the Index on Censorship as a Special Report.