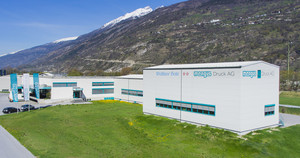 In this interview, Martin Seematter, manager of Mengis Druck AG, in Visp, Switzerland, which prints Walliser Bote, tells WAN-IFRA’s Manfred Werfel why his company is making the move to digital and discusses some of the benefits he sees in doing so.

WAN-IFRA: What were the decisive reasons for you, as a publishing and printing group, when you decided to replace your web offset process with inkjet?

Martin Seematter: We were firstly thinking about an investment to replace our rather dated Wifag/Ferag installation. After all, our newspaper press is already more than 30 years old. Secondly, we wanted this to be an investment in the future, with the potential to add new highlights in commercial business. The intention was to enhance the independence of the publishing house.

Which products, apart from newspapers, do you plan to print on the new inkjet press? And do you need to realise any further special investments to enable book production, for example?

We deliberately chose an equipment configuration with the capability to print, fold and stitch products with up to 96 pages from the very beginning. Furthermore, our production system will be able to print and selectively glue various book blocks.

At 22,000 copies, the circulation of the Walliser Bote is not exactly what most people would consider economical for an inkjet web press. In the past, a limit was generally perceived at 5,000 copies. How would you answer such reservations?

The variable costs in web inkjet are still higher than for an offset process, as they have always been. But it is imperative to distinguish between copying and personalisation. For us, it was important to acquire a future-oriented means of production, in order to be able to realise the envisaged possibilities. We naturally calculated very carefully before committing ourselves to the investment. And our calculations show that it pays off if you consider the whole intended production of the new system, rather than spotlighting just newspaper production in isolation.

Do you expect advantages with regard to editorial deadlines from inkjet newspaper printing? Or will the editorial deadline actually have to be brought forward, because the digital process is unable to match the production speeds of web offset?

In the planning for the new production system, we have been able to maintain the present editorial deadline for the daily newspaper; it was only necessary to make a few adjustments in the organisational structure for early distribution. Generally speaking, therefore, there will be no need to alter the overall scheduling for the newspaper.

One of the particular advantages of digital printing is the possibility to personalise or switch content without stopping the press. Are you planning to exploit this advantage for your newspapers?

As I mentioned, we would like to implement a few of the possibilities for personalisation, but that will come only as a second step. For the time being, the priority is of course to ensure continuous production of the newspaper without major disruptions.

Which papers will you be using for digital newspaper printing? Do you intend to use improved papers or newsprint with higher grammages, so as to minimise the strike-through?

We are currently still testing before we make a final decision. Three papers are still in the running. It is certain that we will be using heavier newsprint for inkjet than we do today. With an improved paper, we might even be able to forego the use of a primer. The primer is a kind of fifth colour, which can be applied before the cyan, magenta, yellow and black in order to reduce the penetration of the ink and thus be able to print a wider colour gamut. We expect the tests to be concluded by the end of February.

What share of the production costs will be attributable to the inkjet inks?

According to our calculations, the inks and primer will together account for around 46 percent of the overall production costs.

How do you judge the print quality attainable in full-colour newspaper inkjet compared to coldset offset?

There is definitely still a lot of untapped potential. But the developments are enormous. When it comes to high print quality, results are always governed by the combination of print process, ink and substrate. If you use inferior paper with an inferior surface, the quality of the inkjet result will naturally also be inferior.

Are we approaching the end for conventional, dedicated newspaper presses, which can hardly be used for anything other than newspaper production?

No, we should view digital printing as a complement to offset. For titles with high circulations, the variable costs for a conventional newspaper press are certain to remain more favourable even in the medium-term future. The domain for digital print should be seen in individualised and personalised production.