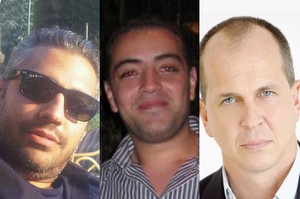 Greste and his Al Jazeera English colleagues Mohamed Fahmy and Baher Mohamed – both of whom remain behind bars in Cairo – were jailed on charges of aiding a terrorist organisation and threatening national security. Their crime was interviewing members of the Muslim Brotherhood.

“WAN-IFRA welcomes the decision to allow Peter Greste to leave Egypt but is adamant that while journalists remain in jail…there can be no cause for celebration,” says WAN-IFRA Press Freedom Director, Andrew Heslop. “Press freedom in Egypt remains a scarce commodity and those journalists brave enough to exercise their fundamental right are increasingly paying the heaviest price. No journalist should be imprisoned for doing his or her job, and no government can claim to respect human rights if it allows the freedom of the press to rot in jail.”

“Journalists are not terrorists!” Greste’s colleague Mohamed Fahmy shouted from the cage in which he was imprisoned during a court appearance in Cairo last year.

No, they are not. But, while the Australian Government campaigned for Greste’s release, it moved to criminalise certain acts of journalism in Australia on the grounds of national security.

Now, journalists reporting on terrorism in Australia could risk imprisonment under a suite of new national security laws and policies brought by the Abbott Government and ushered into law with the support of a compliant Labor Opposition.

The legislation, now in force, represents a chilling attack on media freedom in a progressive democracy.

“This is the most flagrant example of the Australian government posing an open threat to the liberty of journalists and other communicators simply trying to do their job in the reporting of news important to all citizens,” leading Australian media law expert, Professor Mark Pearson, told the World Editors Forum when the legislation was being debated.

Back in September, the federal parliamentary joint committee on intelligence and security charged with reviewing the proposed legislation published its report on the legislation.

It made 16 recommendations to the National Security Legislation Amendment Bill (No. 1) 2014, which legislated to increase the power of intelligence agencies.

This Bill included the creation of “special intelligence operations” (SIOs) and most controversially, harsh sanctions of up to five years imprisonment – increased to 10 years if the information could endanger lives – for anyone revealing information that relates to an SIO, even unwittingly.

No exemptions for journalists

The offence was intended to apply to everyone including bloggers, spy agency leakers and, as confirmed by Australian Security Intelligence Organisation (ASIO) Director of Intelligence and Security, David Irvine, journalists.

According to Professor Pearson: “The Australian Government is sending the clear message to the world community that jail is an acceptable penalty for journalists simply trying to do their job in national security correspondence and that such harsh penalties are a reasonable device to shut down criticism of government policies, and the actions of government agencies.”

“It is the kind of legislation abused so often in other countries and asks the community to ‘trust us’ when information is being stifled by the government on other important fronts such as in the reporting of the fate of asylum seekers and the coverage of activities in immigration detention centres.”

However, critically, there was no such exemption recommended for journalists or whistleblowers. The committee found it was not “appropriate to provide an explicit exemption for journalists from the proposed offence provisions”.

Instead, they recommended the Commonwealth Director of Public Prosecution be required to take into account “the public interest, including the public interest in publication before initiating a prosecution” for revealing information about an SIO.

SIOs are closely modelled on current arrangements for Australian Federal Police covert operations, allowing the Australian Security Intelligence Organisation (ASIO), and its overseas counterpart Australian Secret Intelligence Service (ASIS), to run operations that allow their officers to engage in activities that would otherwise be in breach of criminal and/or civil law (although this excludes serious offences such as murder, serious assaults or sexual assault).

Importantly, Australia doesn’t have constitutional or bill-of-rights protections covering freedom of expression and media freedom, meaning the laws that catch journalists and whistleblowers in the net represent a significant risk.

“Put simply, this proposal … sends a poor example to countries where media freedom is fragile, because it paves the way for the argument, ‘If Australia passes such laws, then why should we not have them and use them?'” Professor Pearson challenged at the time the legislation was before the parliament.

Under the reforms, it is possible that future activities like the 2013 raid of the office of lawyer Bernard Collaery, who was representing an alleged ASIS whistleblower could be labelled SIOs, whereby disclosing any information about these activities could result in jail for both a whistleblower and any journalist they confided in.

The absence of any exemption for journalists in the legislation has come under heavy criticism from Australian media organisations, which have rallied against the “chilling effect” of the reforms on public-interest journalism. In a joint submission, they argued that the laws would “erode freedom of communication and freedom of the press”.

“The insertion of proposed section…could potentially see journalists jailed for undertaking and discharging their legitimate role in a modern democratic society – reporting in the public interest,” the submission stated.

The Australian Lawyers Alliance said the “unprecedented clause” and surrounding reforms would “have a prejudicial impact on journalists reporting on intelligence operations”.

Public’s right to know under attack

“This legislation stands to seriously undermine the public’s right to information about important national security matters and scrutiny of the handling of such matters by government agencies. In recent Australian history, the Haneef case in 2007 stands out as a case where an innocent individual might well have been jailed if his arrest had formed part of such a secret operation and the media had not been privy to certain details that ultimately led to charges being dismissed against him,” Professor Pearson said.

“So it operates on at least two levels – the broader public’s freedom to be informed on such matters so citizens can assess their governments’ policies and actions on national security matters – and the individual citizen’s rights to natural justice and a fair and open trial when accused of such crimes. Sadly, this means that journalists might be imprisoned under such a clause as collateral damage when trying to report upon such matters.”

Reacting to the passage of what are arguably the most significant constraints on press freedom seen in Australia outside of wartime, Katharine Murphy wrote a clarion critique in The Guardian. She noted, “…the community as a whole declined to be outraged…nobody, apart from the journalism industry, the Greens and a couple of crossbench parliamentarians stood up for press freedom.”

How do you define “reckless reporting” of national security matters?

The Australian Attorney-General’s Department responded to criticism by saying only “reckless” reporting by journalists would be subject to the reforms. They have denied that the laws target journalists, saying “they apply broadly and there are elements of them being designed so that they will not apply to legitimate reporting of national security matters.”

The exact meaning of “reckless”, in regard to revealing information about SIOs, was the subject of lengthy discussion at one of the committee hearings. The committee resolved to recommend the term be clarified to require a higher burden of proof to ensure “an appropriate level of protection for press freedoms while balancing national security”, without going as far as specifically exempting journalism.

So, with the successful passage of the legislation through both houses of the Australian parliament late last year, journalists reporting on national security or terrorism stories connected with so-called “Special Intelligence Operations” in Australia could now be jailed for up to 10 years.

What might that mean for Peter Greste (or any other journalist or blogger) if he conducted an interview with an IS operative in Australia in the course of investigating a story deemed to encroach on a “Special Intelligence Operation” today?

It’s all very well for Australian politicians to crow about effecting the release of Greste from his outrageous imprisonment in Egypt. But be cautious about letting them wave the “journalism is not a crime” flag too freely.

Declaration: Julie Posetti is a University of Wollongong (Australia) journalism academic, currently undertaking a Research Fellowship with WAN-IFRA/World Editors Forum based in Paris. In this capacity, she is also leading a UNESCO-commissioned research project examining the state of legal protections for journalists’ sources globally. Jessica Sparks is working as a World Editors Forum research assistant on this project, and Professor Mark Pearson sits on the advisory panel.

The ideas, opinions and findings expressed here are not necessarily those of UNESCO and they do not commit the organisation.

*This is an edited and updated version of an article originally published by World News Publishing Focus, a publication of WAN-IFRA.