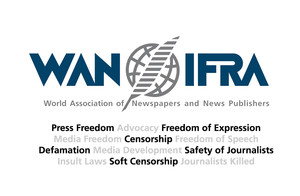 The World Association of Newspapers and News Publishers (WAN-IFRA) and the World Editors Forum (WEF) together condemn this weekend’s attacks in Copenhagen that left two people dead and several others injured.

“We denounce in the strongest possible terms this latest attempt at silencing free speech and stand in solidarity with the Danish people during this tragic moment,” said WAN-IFRA CEO, Vincent Peyrègne. “The year began in such appalling circumstances with the attacks in Paris, and yet it is devastating to find our universal values and common belief in freedom once more under attack.”

On Saturday at around 3:30pm, a film director was shot dead and three police officers were injured after a masked gunman opened fire on a café where a free speech debate was taking place.

After fleeing the scene, the gunman remerged at 1am on Sunday morning, killing a Jewish man outside of Copenhagen’s central synagogue. The suspected perpetrator of both attacks was eventually traced to the Nørrebro district where he was shot dead after engaging police in a shootout later on Sunday morning.

The free speech event being staged at the Krudttønden café in the Østerbro neighbourhood was due to feature Lars Vilks, a Swedish artist who’s controversial portrayal of Muhammad in 2007 has since led to numerous death threats and 24hr police protection.

There is strong suspicion that the attacks may have been inspired by the killing of 17 people during three days of terrorist attacks in Paris at the beginning of January, although nothing has been confirmed to this effect so far.

“The very nature of this attack is appalling – that there are those out there who would look to violently curtail debate on the nature of free speech shows just what level of intolerance we are up against,” continued Mr. Peyrègne. “It is clear that we must remain vigilant and resist all attempts to undermine our freedom, but equally, the divisiveness and hate that such an assault seeks to spread cannot be allowed to gain force. The media has an important role in rejecting a fundamentalist worldview that seeks to destroy our belief in universal freedom, as well as in helping to promote the shared values that will allow us to overcome fear.”

WAN-IFRA is the global organisation for the world’s newspapers and news publishers, with formal representative status at the United Nations, UNESCO and the Council of Europe. The organisation groups 18,000 publications, 15,000 online sites and over 3,000 companies in more than 120 countries.