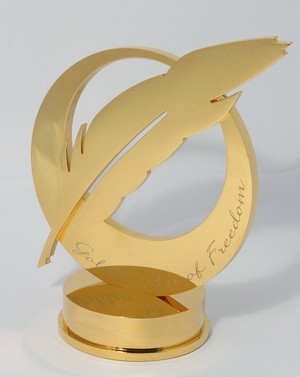 Behind the ceremony and the award, the lives of the laureates are ones of extraordinary personal courage and self-sacrifice, with stories of imprisonment, beatings, bombings, censorship, exile and murder.

One of the objectives of the Golden Pen is to turn the spotlight of public attention on repressive governments and highlight the journalists who fight them. Often, the laureate is still actively engaged in the struggle for freedom of expression, and is sometimes still imprisoned at the time of the awards ceremony, as was the case of last year’s winner, Ethiopian journalist Eskinder Nega, who unfortunately remains in prison as of this writing.

The Pen has, on several occasions, secured the release of a publisher or journalist from jail or afforded him or her a degree of protection against further persecution.

Today, with killings and imprisonments of journalists around the world continuing with alarming regularity, the significance of the award has never been higher and press freedom efforts never more needed.

This year, rather than singling out a specific individual or institution, the Golden Pen of Freedom for 2015 will recognise all Journalists Killed in the Line of Duty. We have made this decision based on the following key facts:

1,100 journalists killed since 1992,
but few perpetrators brought to justice

An estimated 1,110 journalists have been killed since 1992. Of these, 715 were murdered outright and their killers have, for the most part, evaded punishment. Reporting on corruption, crime, conflict, politics and human rights has proven deadly for far too many. Threats and kidnappings escalate into killings, a fatal yet avoidable outcome cemented by weak or indifferent authorities who feed a cycle of impunity.

As the Committee to Protect Journalists has stated: In 90 percent of the cases, no perpetrator has been brought to justice, and this silencing message fosters self-censorship. It weakens the ability of the press to hold power to account and suppresses public scrutiny of sensitive issues.

If those same deadly numbers existed in any other profession that has such an impact on how we define and understand our world, one would expect the outcry to be emphatic, the investigations relentless, and the commitment to reversing the trend universally forthcoming.

As they should be.

Imagine if politicians, lawmakers or religious leaders were being similarly targeted, with the same frequency, in such repetitive circumstances. Think what the impact such crimes would have on society, and how it would affect you.

In honour of fallen colleagues, and to focus the international spotlight on the issue of safety and impunity for journalists worldwide, awarding the Golden Pen of Freedom to Journalists Killed in the Line of Duty sends a powerful message to the perpetrators of crimes against the media as well as to legislators and those with the power to enact better laws and enforce stronger protections for newsgatherers around the world.

For more information about the Golden Pen, including a complete list of winners, please see: https://wan-ifra.org/node/34598.

For materials relating to the latest International Day to End Impunity for Crimes Against Journalists, see: https://wan-ifra.org/node/120942.

For our statistics on journalists killed, see: https://wan-ifra.org/node/97354.