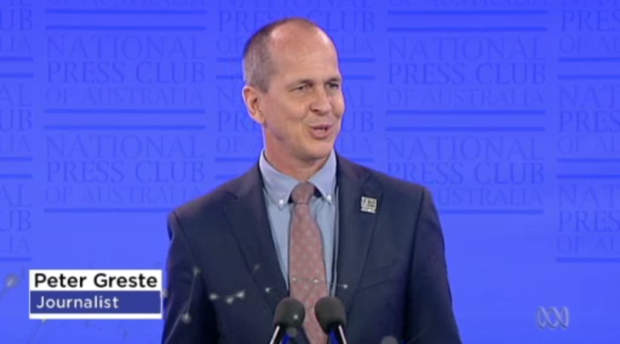 After spending 400 days in an Egyptian prison on trumped-up charges, the Al-Jazeera journalist was released amid growing international pressure. He is now recovering in Australia.

While still in jail in Egypt with his Al Jazeera colleague Baher Mohamed, Greste says the pair determined to find a way to protect other journalists who face politically motivated charges.

“We wanted to find a way to help protect journalists that might transcend state boundaries, and in the end he suggested some kind of universal media freedom charter,” Greste told journalists at the National Press Club in Australia.

Greste argues an ‘us versus them’ mentality has made it difficult for the press to challenge governments, and that since the ‘war on terror’ began, abuses of human rights and of press freedoms have worsened.

“It almost feels like a kind of globalised McCarthyism, where simply invoking terrorism is enough in some cases to get away literally with murder,” he said.

“In this new world, to simply ask questions about the conflict or to seriously investigate either extremism or the government’s handling of it is to make yourself a target,” he said. “The trouble for us journalists is that in this conflict there is no neutral turf, no safe ground from which to report.”

It should act in a similar way to the UN Declaration of Human Rights, says Greste. Since 1991, when the Committee to Protect Journalists began keeping records, the past three years have been the most dangerous for journalists.

Greste expressed concern at moves by his own government which threaten to weaken the democratic function of the press, including its just-passed bill to collect and retain telecommunications data.

“In my work in more authoritarian places I’ve often noticed that [in] the relationship between the government and the media there is a sliding scale that defines the way that power is distributed,” says Greste.

“If you take power away from one then you give it, by definition, to the other.”

He also levelled criticism at the government’s refusal to allow journalists onto offshore detention centres, which have been the recent focus of international scrutiny.

“The public has a right to know. It’s as simple as that. This is our government. We hire the government – they work for us, not the other way round,” he said to applause.

Greste thanked the “cranky” and “cantankerous” room of journalists for uniting and calling for his release.

“We’re impossible to organise, we are by nature argumentative and we’d rather compete than cooperate,” said Greste. “I’m willing to bet that journalists have never united around a single common cause in the way they did ours.”

Baher Mohamed and Mohamed Fahmy, Greste’s Al-Jazeera colleagues who were imprisoned with him, still face a retrial in Egypt (as does Greste). Their case is adjourned until April 22.