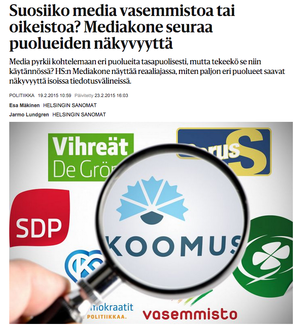 During the run-up to elections, the accusation of media bias inevitably arises as the stakes get higher. But typically critics struggle to put together substantive evidence that would confirm systematic bias, having to rely on anecdotal examples instead.

Helsingin Sanomat (HS) has found a way to do this, using an automated sytem created by Helsinki-based start-up Defcomb. It scrapes the content of different news outlets in order to analyse the amount of coverage that the different political parties get. The results are presented on the website of the project, titled Mediakone (Media Machine), in real time.

The automated process doesn’t take into account the type of coverage (positive or negative), but only detects when a party, or its representative, is mentioned in an article. Still, media monitoring on this scale would have been hard, if not impossible, to execute without the help of a computerised method. Mediakone is thus the latest example of a computerised process that is used to support journalism (rather than to replace human journalists).

HS resultsSo far, the findings confirm what many would have expected: the ruling parties get more attention than the opposition as they hold more power, explains Marko Junkkari, HS’s Editor at Domestic Politics, Business and Economics News Desk. Moreover, big parties have more political weight than small ones, which explains why the media focus on them. Finally, the attention shifts according to the political issues of the day.

WAN-IFRA spoke to Heikki Manninen, one of Defcomb’s founders, and Esa Mäkinen, HS’s data journalist, about the project.

Q: Do you have plans for using the automated system in other projects?

A: We’re currently looking into this, as our feeling is that automated analysis could be used for various purposes. For example news material could be monitored for information on events concerning a specific topic (what, where, when), and the material could be visualised in real time. Being able to find interesting connections between events would also be a goal.

We could also examine how different topics are covered, for instance how men and women are discussed differently in the news in different contexts such as success, politics or sports. It would also be great to put news on military conflicts through a filter, and examine how rhetorics on war and peace differ between countries, and then present this information on a map.

The system is built so that any textual content can be used as material. We focus on news because of it’s reliability and steady flow.

Q: What was the most challenging aspect in the media monitoring project?

A: Natural language always has an element of ambiguity, but we managed to build a system that can be used to produce data on the topic quite rapidly. It was challenging to decide what kind of data we can show so that the readers understand the information correctly without having to know the details on how it’s produced.

Q: It seems that thanks to automated analysis, material can be collected and analysed in a way that would have been impossible, or at least extremely laborious before.

A: That’s correct. The system is an innovative and efficient way of analysing unstructured content such as text.

Q: Are you planning to write more articles based on the results of the project?

A: That’s the plan. For example before the elections, we’ll probably put together an overview of the coverage overall during spring.

Q: What has been the project’s biggest achievement so far?

A: It increases transparency and turns the spotlight on the media. As we demand transparency of the others, it’s good to practice what you preach.

Q: What was the most challenging part of the project?

A: Coming up with the idea. The system allows for many things, and it was difficult to come up with an issue that could then be shown to the readers in an easy and intelligible manner.