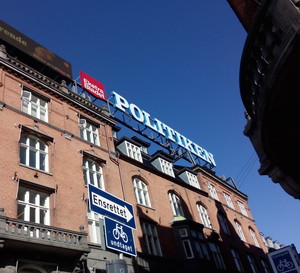 It’s just a couple of hours before the apple watch launches and we’re sitting in a sunny room above a bookshop in the heart of Copenhagen, in the offices of Danish publisher JP/Politikens Hus.

A couple of people are wearing Android Wear, but when asked if they would buy an Apple Watch, there is a general shrugging of shoulders. That’s not the topic. This summit is focused on the bigger picture: the future of mobile.

Keeping pace is tough when, as host and JP/P Exec VP, Dorthe Bjerregaard-Knudsen points out, Denmark is the most digitised country in Europe, according to DESI2015.

They calculate the average Dane is spending an hour more per day across all platforms, and that growth has been almost entirely due to mobile.

As a Partner at Andreessen Horowitz, Benedict Evans is a mobile evangelist. Mobile is now at the heart of the software companies they have invested in.

While Apple and Samsung may be the biggest manufacturers of mobile devices, Evans points out that it’s the $35 Android phone that has truly revolutionised the market. So there is an odd hardware dichotomy. Basic hardware costs are extremely low compared to the cost of data, but the device is so essential that high-end consumers are willing to invest in new handsets every two years, dwarfing the laptop or desktop PC markets.

For now, there is money to be made for diverse hardware manufacturers and resellers. But in software it’s a different story. There are low barriers to entry but very few winners. Evans uses the example of Whatsapp that processes 30bn messages per day with just 30 engineers based in the Ukraine. The fight for mind space on apps is brutal & the losers face a battle just to be discovered.

For publishers, even after their news app has been installed and accepted, the battle continues to monetise the content. Using the analogy of a jet fighter plane, Evans described the operational balance of paid and free content as “staying within the flight envelope”. If you slip out, you die. Unsurprisingly, at Andreessen Horowitz they do not invest in content companies.

Video snacks on mobile – only the millennials are eating

Evans might describe Buzzfeed as a software company, but most media houses are interested in content. For JP/P, Aftonbladet and others looking to make bigger plays in the TV space, Evans offers the reassuring statistic: TV sets make up only 24% of video consumption (source: Ofcom).

But a few minutes later, futurist Duncan Stewart gives us the flip-side. Although there may be device promiscuity, traditional TV still absolutely dominates its short form equivalent. We still watch an amazing 8 million minutes per second of traditional TV. The difference is that we’re happy to watch the TV on tablet or desktop rather than a dedicated television screen.

The real change in North America is happening among 18-24 year olds, a demographic that now watches 25% less traditional TV since 2011, according to nielsen. This is a group that snacks on news. No longer prepared to give up hours to watch a full American Football game, millennials follow on Twitter and video highlights.

It’s not just traditional TV, print is also alive and kicking. YouTuber Zoella’s book Girl Online was purchased 20 times more as a paper book than as a download. Some teens simply said they ‘liked the smell’.

It seems the future is less dramatic and bombastic than we like to think. Millennials are as happy as ever to pay for content. They visit the cinema 7.1 times per year and spend the money we once spent on CDs and vinyl on live gigs and festivals. So you can still “judge a person by the cover of their books” as Stewart puts it.

The media industry needs to migrate and JP/P are well on their way. They have their own danish language version of Buzzfeed and an increasing user base on Paid content on Ekstra Bladet.

As the millennials grow up, we’ll find out how successful the migration was.