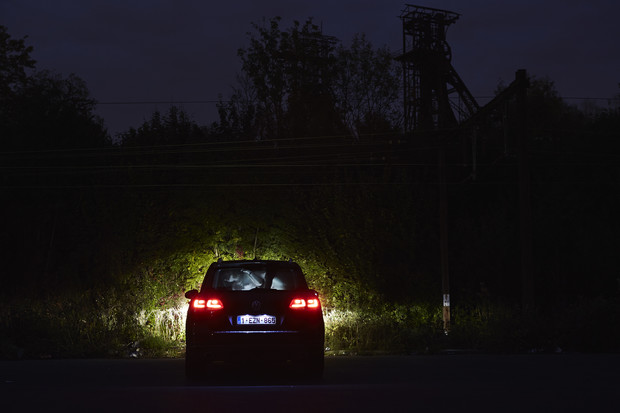 UPDATE: World Press Photo have reopened their investigation following new information that one of the Troilo’s photos was actually shot in Brussels, not Charleroi.

Following complaints from the Mayor of Charleroi, Belgium, that Troilo misrepresented the town in his story ‘Dark Heart of Europe’, World Press Photo investigated the story and concluded that it met their standards to be worthy of the prize.

The series of photos depicts the town of Charleroi facing the challenges of collapsing industry and social unease, where “a perverse and sick sex, race hate, neurotic obesity and the abuse of psychiatric drugs seem to be the only cures being able to make this endemic uneasiness acceptable“.

However, Troilo admitted to TIME Magazine that he interfered in at least one photograph, in which he set up a flashlight under a couple having sex in a car to improve the image’s quality – though the photographer claims he did not stage any photos.

TIME’s own independent investigation also found that the ‘asylum’ in which Troilo’s grandmother used to live, and in which his aunt currently lives, was simply a nursing home.

Troilo told TIME that: “What I did is pretty much letting them know that there was a camera, and I just took a photo.”

“They knew I was there, and they didn’t do anything different than what they would have done.”

Pulitzer Prize winning photographer and a previous judge of the World Press Photo prize Greg Marinovich, who is now the Chief Content Officer of photographic agency startup The Stand, contests that Troilo was journalistically accurate.

The flashlight itself “isn’t what constitutes the staging”, says Marinovich, “It’s just the indicator that it clearly was staged. It’s the lights of the car being on; and it wasn’t just that, it was several other things, [for example] the way the captions were presented.”

“The thing is in portraiture you can do that … if he said that: ‘this was staged to recreate’ and left it at that, and it clearly shows that it’s a recreation, that’s fine and it has a place in photography,” says Marinovich, “But if you don’t specifically, and you word it very ambiguously, and you have a series of pictures of ambiguously worded captions and dodgy looking [photos] that raise red flags then that’s a problem.”

In a press release following the controversy, World Press Photo said: “The contest requires photojournalists do not stage pictures to show something that would otherwise have not taken place.”

“Staging is defined as something that would not have happened without the photographer’s involvement.”

“It is not acceptable for contest participants to mislead by staging their pictures.”

NOT acceptable for contest participants to mislead by staging their pictures. Clarification on yesterday’s statement: http://bit.ly/1GGspiG

33 people are talking about this

By these standards, Troilo’s photo story should not have won the prize.

Following the three-day investigation of Troilo’s work, World Press Photo concluded that: “No misleading facts have been uncovered in the caption information that was made available for the jury. As a result Giovanni Troilo’s award stands in the 2015 Photo Contest.”

The Managing Director of World Press Photo Lars Boering told TIME that: “He explained to us that it was a nursing home where his aunt also was.”

“I think it was a bad choice of words from Giovanni. I need to check with the team that researched it, but I don’t think it was considered a big issue.”

Marinovich says it must be considered whether the captions were simply the result of a language issue, but that “overall it’s a very contentious award that World Press [Photo] and the jury should step back from.”

“I would certainly recant that award if I was in that position.”

According to Marinovich the photography is clearly a mix of genres and should have been considered in a different category.

“It can’t be in a section where it’s presumed that this is documentary or photojournalism under the standards that we expect.”

He says it’s a “mystery” that the judges chose to uphold the decision, especially considering World Press Photo’s chair Michele McNally was previously a photo editor at the New York Times, where something like this wouldn’t have passed.

“I’ve worked at the New York Times for years [as a freelancer],” says Marinovich, “They’re very strict, they wouldn’t allow these pictures to be used with those captions in the newspaper. It wouldn’t pass their fact check procedure, so it’s puzzling.”

The decision sets a dangerous precedent.

“The consequences are that the World Press Photo, which is the most esteemed photo competition for photojournalism and documentary photography in the world, and has a huge reach, is saying it’s okay to fudge the lines,” says Marinovich.

Danger of the World Press Photo’s decision is new generation of photojournalists who will think staging is ok. http://time.com/3728436/

How Did World Press Photo Decide to Uphold Controversial Award

The Dutch organization stands by its decision to award Giovanni Troilo’s work, despite limited investigation into the claims

“If so you’re in a heap of trouble, because how does the public know? How do our communities know that we’re telling them the truth if we don’t want to specify that this is a picture we arranged or managed as opposed to something we just captured? How on Earth does the public know and trust us, We’d have no credibility left.”

UPDATE: Giovanni Troilo has responded to request for comment and to whether he admitted that his photos were staged, as the Guardian wrote:

“No, I never said that some of my photos that won the WPP were staged. During the last few days I worked together with WPP to produce a statement that was as clear as possible. I hope from there you’ll can find all the needed information.”