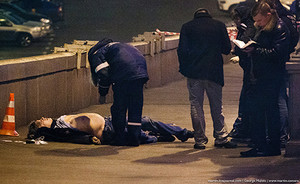 News of Nemtsov’s death spread like wildfire over social, online and broadcast media on Friday night. As Western, Ukrainian and Russian newspapers tried to make sense of why opposition leader was shot, the reaction and analysis was predictably divergent.

Russia’s more independent news outlets, which are critical of Putin’s regime, including the business dailies Vedomosti, Kommersant, and Nezavisimaya Gazeta (‘Independent Newspaper’) took a more interesting approach. They shifted the focus from the motives behind the murder to its deeper implications for the socio-political landscape. They avoided addressing potential motives behind the murder explicitly, either to side-step censorship or refrain from stating the obvious.

The Ukrainian media, predictably anti-Putin, condemned Russia’s president for commissioning the murder. The Ukrainian news portal ‘Obozrevatel’ (‘Commentator’) owned by a Ukrainian politician Mykhailo Brodsky, claims that Nemtsov was about to release documents revealing Putin’s plans to invade Ukraine, Belarus, Kazakhstan, Lavia and Estonia. The news portal also said Nemtsov had a list confirming the deaths of 7,000 Russian citizens during the course of the Russo-Ukrainian conflict.

Meanwhile, Russia’s pro-government news outlets formed an echo chamber, stressing that the murder was a political “provocation” against the Kremlin. Russia’s pro-government news outlets formed an echoe chamber ‘Vzglyad’ (‘View’), blamed Ukrainian oligarchs for commissioning the murder after being dissatisfied by Nemtsov’s efforts to destabilise the Russian government. Yet Nemtsov’s murder occurred only a day before his scheduled mass rally in support of Ukraine.

Pro-Kremlin newspaper Russia Beyond the Headlines refers more than five times to the murder as a political “provocation”.

The Independent in the UK, owned by former oligarch Alexander Lebedev, wrote “there exists a second Russia, which refuses to blindly believe that which the Kremlin’s press calls ‘national interests’”.

The Washington Post said that “the drive-by shooting had the potential to open a violent new chapter in Russian political life”. Yet while the newspaper refers to Nemtsov as “one of the loudest voices condemning Russia’s sharp turn toward confrontation with the West” and “the highest-profile opposition leader”, many independent and pro-government news outlets in Russia beg to differ, claiming Nemtsov’s official political career has been over for some time and that he posed no significant threat to president Putin as a political rival.

While pluralism and social protest lie at the foundation of many democratic Western states, they are widely held to be a futile practice by Russian media. Vedomosti and Kommersant remain skeptical about Russia’s future, presenting the murder as signal of Russia’s return to Soviet practices, and Putin’s re-institution of the iron fence so as to isolate Russia politically from the rest of the world. Russian media and general mentality are governed by a sense of disillusionment relative to the potential of social upheaval to yield change on Russia’s political arena. This is evidenced by the low turnout at Russia’s previous mass rally in support of the arrested opposition leader Alexei Navalny. Less than 10% of the 18,000 supporters who confirmed their attendance on social platforms including Facebook showed up to the protest last December.

Vedomosti describes the event as a turning point at the “the climax of a cold civil war”, claiming that it is the government’s means of mobilising its nationalist supporters in the public by removing a political figure widely portrayed on television as an enemy of the state.

According to Vedomosti, at the start of the 21st century, there was an unofficial taboo regarding the murder of political opponents with a prominent presence in the media. The murder has officially put an end to this taboo, reflecting the government’s change in its political stance towards repression. The Kremlin’s logic rings clear, claims Vedomosti: “those who have physical force are always right.”

Both Kommersant and Vedomosti conclude there is little hope that the murder will destabilise the government, much less lead to a revolution.

Even foreign investment in Russia’s economy is unlikely to be undermined by a political murder that is only to be expected from a country notorious for its corruption, claims Kommersant.

The only potential cause for Russia’s destabilisation may be the domestic economy’s steady deterioration, say the news outlets. The increasing financial burden that ordinary citizens must endure may undermine any remaining sense of nationalism they have.

The Western media’s more optimistic views of the murder’s social implications may appear naive in Russia.

“Just as in the Soviet times, Russian dissidents look to Western democracies as a source of hope… While imposing more sanctions on the Russian regime, the West must not stop its dialogue with the Russian people”, urges the Financial Times.

According to the Independent, “there exists a second Russia, which refuses to blindly believe that which the Kremlin’s press calls ‘national interests’”.

Despite the media’s polarisation, both Russia’s independent news outlets and the British press concede that the unpunished eradication of political opponents is a long-standing practice in Russia. Investigations into the last ten political murders were never resolved in Russia.

Meanwhile, pro-government news outlet Russia Today is to be investigated for the sixth time by UK’s media regulator Ofcom over its anti-western and allegedly misleading coverage of events in Ukraine. It is additionally being approached with statutory sanctions after repeated breaches of broadcasting regulations on impartiality last year.