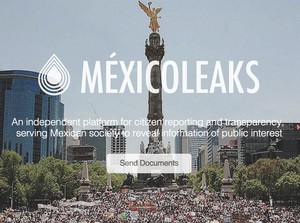 Prominent broadcaster and investigative reporter Carmen Aristegui was sacked by MVS Radio, where she hosted one of the country’s most popular news programs. Aristegui’s dismissal followed her call for the reinstatement of two colleagues who were also sacked by MVS for associating the radio network with Mexicoleaks – without the company’s permission.

Mexicoleaks is the latest addition to a growing trend in investigative journalism – the collaboration between media competitors through secure portals designed to receive documents and other information from confidential sources. And it clearly frightens powerful oponents of freedom of expression and information in Mexico.

Assessing the cost of Aristegui’s sacking

According to Dulce Ramos, Editor-in-Chief of Animal Politico, one of six news publications collaborating on Mexicoleaks, the biggest impact of Aristegui’s sacking will be the cost to Mexican investigative journalism.

“The relationship between most of traditional media outlets – press, radio, TV – and power is so tight and, to say the least, distorted, that there are just a few spaces to make good journalism and bring it to audiences. And losing one of those spots is a tragedy for journalists who are really committed to investigate, and [the ones who] stand out between all other reporters that just replicate the speech of public servants,” Ramos told the World Editors Forum.

Mexico’s fragile democracy will also pay the price according to Ramos: “Losing spaces for free, independent journalism is terrible for Mexican democracy. The checks and balances system in this country is slowly crumbling.” Ramos said the cost of losing a critical voice like Aristegui’s from the Mexican airwaves would compound the deterioriation of public trust in the media. “Given the distorted relationship between power and media, it is no surprise that, in general, Mexican citizens don’t trust in journalists. That is especially serious when 14 journalists have been murdered just between 2010 and 2015.”

Aristegui, who last year exposed a property scandal known as Casa Blanca which involved Mexico’s First Lady and a government contractor, attracted massive support online in the aftermath of her dismissal.

What makes Mexicoleaks such a threat to power in Mexico?

The answer is simple: it supports secure whistleblowing and empowers investigative journalism. “In a country with an endangered democracy, building trust and taking down obstacles such as fear, threats, or political consequences is critical in the goal of helping citizens reveal what they might know. I’m sure that fear discourages whistleblowing. A platform like Mexicoleaks endorses it,” Ramos said. And in a country like Mexico, where citizen reporters are increasingly becoming victims of the cartels, digital protection for whistleblowers is vital.

Like similar websites in Africa and Europe, Mexicoleaks requires confidential sources and whistleblowers to take steps to ensure their digital safety before sharing information via the secure dropbox. “This is a co-responsibility. If the whistleblower follow the required steps, no one will be able to keep track of the source,” Ramos said. “But if mistakes are made such as not deleting the files’ metadata, we are in fact able to know who the whistleblower is. Of course if some sensitive documents come to us with compromising metadata, we will delete them and fully protect our sources as we always have done.”

Breaking through competitive barriers to help bring the powerful to account

The six media outlets involved in Mexicoleaks – investigative magazines emeequis and Proceso, and Aristegui Noticias included – partnered with two civil society groups before launching. “One of the greatest things that Mexicoleaks brings to the Mexican media scene is that, for the first time, a wide group of outlets recognize their [competitors] and begin a collaboration network,” Ramos said. “We all might not cover public issues the same way, and with the same focus, but we recognize each other as outlets or organisations that do journalism accurately, honestly and with a strong commitment with each one’s readers.”

And it’s a collaboration that’s already proving successful. While she won’t reveal the exact number of leaks Mexicoleaks has received since the scandal surrounding its star backer broke, Ramos makes it clear that the project has found traction: “For security reasons I can’t disclose the number of leaks we have recieved in just one week. But I can say that we are going to have a lot of work. Really. A lot.”