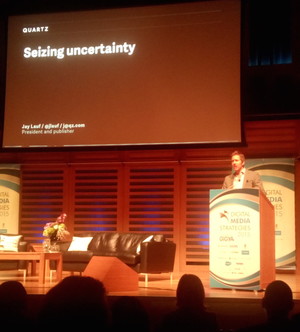 It’s a very binary discussion. Taking their turn on the stage at Digital Media Strategies last week in London, Quartz said “the homepage is dead”, while ESPN said “the homepage isn’t dead”. In fact 50% of ESPN traffic comes directly to the site and they talk of content driving brand loyalty and engagement.

But when Quartz got one of their biggest scoops, a video interview with President Obama, they published it first on Facebook, at least in a shortened form.

Their President and Publisher, Jay Lauf, even takes the question to its logical extreme: “what if nobody came to our site anymore?” Can you work out a business model that works?

For Lauf, the new loyalty means reading the daily newsletter, checking stories on Flipboard or downloads from the newsstand on Google Play. Focusing on the API rather than the platform leaves them space to experiment and analyse the performance of the content rather than the container.

For example, they have done extensive analytics on the perfect article length (answer: mix it up!), encouraged readers to annotate texts and made their own chart builder tool available on Github.

As Lauf freely admits, the newcomers have the advantage of being able to start from a fresh slate, but “we should all behave as if we’re in a crisis”. A still profitable business distracts you from innovation, which is why, “Blockbuster didn’t become Netflix”.

As Quartz expand their newsroom, they are trying to re-write the rules of online advertising. For them, a sponsorship with Nasdaq is much more valuable than a standard display ad, a format that they already use extremely sparingly.

Lauf quotes the classic statistic that you’re more likely to be in a plane crash than have someone click on your banner ad. Instead he points to their own study that showed 86% of execs are genuinely interested in content from brands. The number one obstacle among agencies and advertisers is apparently a “lack of familiarity”.

Asked about their revenue, all Lauf would say is that they could be profitable this year “if they wanted to”. If the homepage is dead, the new business model is still very much in the incubator.