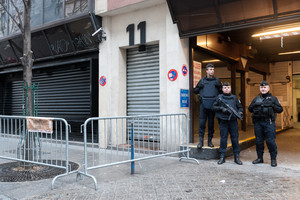 TV5 Monde’s Director General Yves Bigot now has a panic button installed on his desk. If he hits this button, within one second, the facilities will go into lockdown. “If I have a warning from riot police outside or surveillance people…I can press that button and shut all doors automatically, and the local police station is warned automatically if there is a threat in our venues,” Bigot told a UNESCO-hosted debate on Journalism After Charlie last week.

“They have increased a lot in the past 2 months”, Bigot said of the threats made against TV5 Monde and its journalists.

At the network’s Paris headquaters, three riot squad officers, armed with machine guns, stand guard around the clock. A police van is also present, along with a specially trained officer who searches incoming vehicles and visitors. It’s a scene repeated at many of Paris’ media outlets.

Last Friday night, on my way home from an inner-city birthday party in Paris, I walked my little girl past a machine gun-toting officer guarding the temporary headquarters of Charlie Hebdo. We had to wend our way around the police van parked parked opposite on the narrow street. And there was another riot squad officer stationed a few paces along. This is a shockingly normal sight outside the premises of numerous Paris news publishers in 2015. It’s a very confronting reminder of the lingering impact of the attacks that brought 21st Century terrorism to the heart of a Western European newsroom.

Further evidence of the impact is a decision by the International Federation of Journalists (IFJ) to take security advice and keep secret the exact location of a conference tackling the impact of extremist violence on media workers which is currently underway in Paris. IFJ safety training expert Monir Zaarour told Friday’s International Program for the Development of Communications (IPDC) debate in Paris that: “We have been advised not to reveal the venue where we will be meeting. Safety has come in the mind of journalists everywhere since Charlie. It’s in the mind of everyone – that is why we take it very very seriously.” 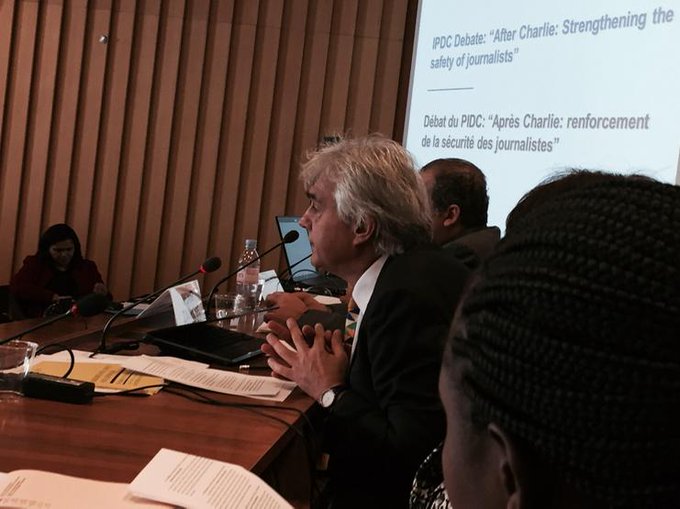 As, Guy Berger, UNESCO’s Director of Freedom of Expression and Media Development said: “The attacks…were a watershed that highlights that the safety of journalists is not necessarily limited to countries in conflict.”

When reporting in high risk areas internationally, Bigot’s correspondents not only wear protective combat clothing, they are required to abandon their mobile phones in danger zones because of the ease with which they can be detected by potential attackers. They are also required to check in with their colleagues back in the newsroom every 12 hours, and they must follow specifically designated ‘protected routes’ when travelling to and from their hotels.

Additionally, TV5 Monde and affiliated network reporters carry and activate tracking devices when they enter danger zones. “As soon as they reach an area that is not highly protected, they turn their trackers on themselves – like a pager – that can specifically locate the journalist at any time in the field,” Bigot said. “When we see that it is stable for too long we worry.”

But foreign correspondents also face a new threat: the risk of their interpreters and fixers being ‘turned’ by IS or other terrorist groups. “They are…nationals of the country in the field, they are absolutely essential in the middle east and central Africa, (but) they can be turned by Daesh (IS), other groups. They are bought for financial reasons and can turn on our journalists,” he said during the UNESCO debate. “They have the means of changing the lives of these fixers and can also be turned for ideologicial reasons and can be turned very quickly. We will sleep in this hotel, we are currently in this vehicle on this road – it can be information like this given to these groups.”

According to Bigot, betrayal by fixers has resulted in the abduction of journalists, and the random nature of the threat makes it very difficult to combat.

The psychological impacts of conflict reporting are now also under closer scrutiny post Charlie Hebdo – and not just in combat zones. Dinah Kituyi, CEO of Dial-a-Counsellor in East Africa, is a psychologist and journalism trauma expert. She told the UNESCO meeting that she sees journalists as “The ones who run towards danger – towards the gunfire – while everyone else runs away. (And they have) limited protective capacity.” Conflict reporters are not protected by filters such as notebooks and lenses. The are primary victims of trauma, Kituyi said.

“What you hear, what you touch, what you see, what you smell, these are the affects. Journalists are primary victims of trauma” #journosafe

Flashbacks, nightmares, substance abuse, severe depression and suicidal tendancies are some of the trauma impacts that may be experienced by journalists in conflict zones or, as was the case with the Charlie Hebdo attack, at their newsrooms desks.

“There is a lot of negative resiliance that has kept journalists going. Many believe it is a sign of weakness, so they keep it to themselves. Some hide it by substance abuse. Their motto: suppress it as much as you can,” Kituyi said.

A Danish IPDC delegate asked the panel of experts: “If we check the equipment when they come back from the field, why don’t we check the journalists themselves?”

While foreign correspondents returning from conflict and disaster zones increasingly have access to trauma counselling and safety training, the situation is different for freelancers and local reporters on the ground in places like Niger, where Boko Haram is a constant threat.

“It’s the responsibility of the employer to protect journalists. But freelancers don’t have access to this protection” Zaarour

“It’s the responsibility of the employer to protect journalists. But freelancers don’t have access to this protection” Zaarour #journosafe

The meeting heard that there is a growing need to shift the focus away from international experts providing safety training to communities of journalists based in conflict zones, and towards the practice of training local trainers to ensure that skills development benefits from location-based knowledge, and that it is not hampered by translation issues.

There is a need for collaboration between governments, civil society, the judiciary and the media to address the global problems of violence against journalism and the murder of journalistic actors with impunity. International expert on journalism protection mechanisms, Carlos Cortes, told the IPDC debate about the framework in Colombia. The Colombian Protection Mechanism for Journalists was introduced 15 years ago, in response to the murder of journalists in retaliation for their work. Thirty six Colombian journalists were killed in the particularly brutal period between 1989 and 1993. 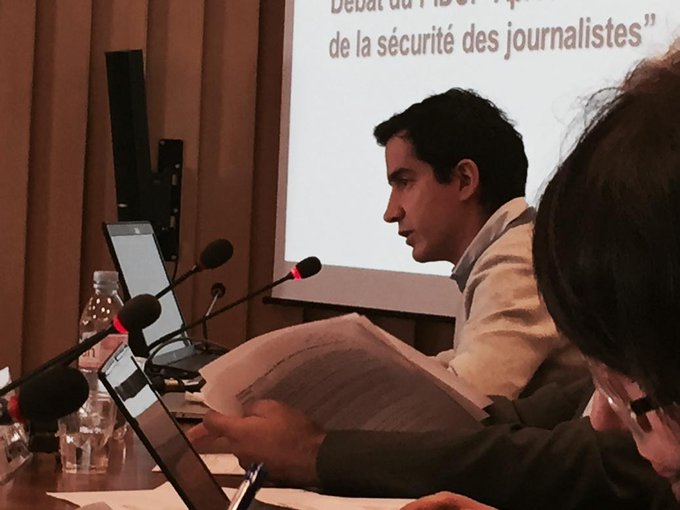 According to Cortes, following an alert, “The National Protection Unit can assess the problem and decide whether it warrants an emergency response, such as securing the media house, taking the journalist away, or giving them a guard.” However, despite the success of the program, “Threats against journalists have still not merited a single conviction. Even now,” Cortes said.

Give journalism safety and impunity the headlines the issues deserve

UNESCO’s Guy Berger highlighted the need for the media to report on these issues, particularly in the context of the UN Plan of Action on Journalism Safety.

“In a global world, to stop journalists being killed anywhere, it is necessary to stop the attacks everywhere. There should be no space for ‘precedents’ and copycat killings; instead journalists need to be protected, and perpetrators of attacks must be brought to justice,” he said. “Sharing experiences and building practical responses will give concrete effect to the basic norm that violence against journalism cannot be permitted.”

Following Charlie Hebdo, many French journalists see themselves as “Soldiers of freedom of expression,” Yves Bigot told the debate.

“People are still asking to go on mission. I have not seen any fear or back down. Our journalists want to be part of the fight for the freedom of expression and the quest for truth, and we have a mission for all the citizens that share this that we have to be witness to what’s happening in all corners of the world.”

All corners of the world, including the corners of newsrooms, where attacks on journalists and their murder with impunity too often fail to make the headlines.