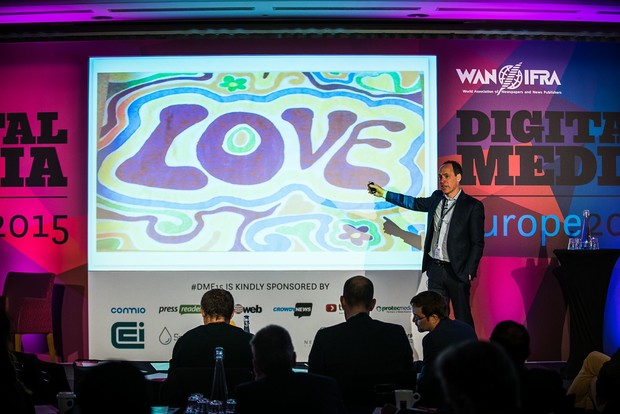 Christoph Keese, Executive VP of Axel Springer took the stage for the keynote at WAN-IFRA’s Digital Media Europe conference in London and presented a vision of the future for media. It’s a vision based on Silicon Valley, love, disruption, and platforms.

“We are a heavily digitised company,” he says. “Seventy-five percent of our ads are digital. Close to two thirds of our operating profit is digital. In 2013, our company sent four executives to Silicon Valley to get a better idea of what is happening next. Silicon Valley used to have the hippie culture and back then, the most popular word was ‘love.’ Now the most popular word is ‘disruption.’ ”

Disruption is not the same thing as innovation

Like many buzz words, “disruption” is often poorly understood, and Keese is keen to clarify what is and what isn’t disruption;

“Disruption is often mistaken for innovation, even used as a synonym,” Keese says. “That’s not the case. Take the example of look at the record business. When the CD came along it was hugely innovative, but it was not disruptive. From the business point of view, you just changed the machinery in the production plants and put new racks in the stores, but this is not disruption; it is sustained innovation that keeps the same market structure and distribution alive. Spotify, on the other hand, now that is disruptive. Now you have no disc presses, no stores.”

Keese’s point is that while disruption may be at the heart of the Silicon Valley approach, it is far from the affections of legacy business and yet the history of business is one of incumbents being displaced by disruptive newcomers.

“Legacy businesses typically respond to disruption with laughter. Just look at how the news industry laughs at BuzzFeed with its funny animations of cats. Well, when you hear that laughter it is from those who are on their way out.”

Part of the reason for that, argues Keese, is that we are being hamstrung by the very people we feel we know how to please – our own customers. He showcases the example of his father working in the mainframe computer business and how all of IBM’s customers, if asked what they wanted, would reply that they wanted double the performance at half the price-point. What they wouldn’t answer was that they wanted to replace mainframes with computers for each department because the customer doing the buying had a vested interest in the mainframe approach.

Which immediately creates an opportunity for a disruptive player to burst into the market and steal our business from under our noses.

To build his argument, Keese highlights:

Lending Club – a platform for unsecured consumer credit that matches lenders and borrowers without a cent going to the banks.

Instagram – which “employs only 17 people to keep the photographic memory of mankind when a couple of decades ago Kodak employed 150,000.”

Bookstores versus Kindle, and Die Welt versus Flipboard.

He also notes that in stark contrast to traditional models, the new platforms tend to be able to scale up with an agility that legacy media can only dream of. “If the user base doubles at Flipboard, they say they would need just one more cloud expert to respond.”

‘It is almost impossible to disrupt yourself’

So what is Axel Springers’s response to the threat/potential of disruption? Well it’s not a “skunk works” of internal alternative development.

“My first thought was ‘Hey, I do disruption, so why not disrupt ourselves?’ Well, it isn’t possible to work hard to take care of your daily business by day, then work to destroy it by night. It is almost impossible to disrupt yourself, so you have to invest in the disruptors, to take stock in them, even minority stakes.”

A look at the cast list of Axel Springer’s high tech acquisitions shows that’s not just talk, and one of the great things about Digital Media Europe is that during the next couple of days we’re going to be hearing from some of those disruptors themselves.