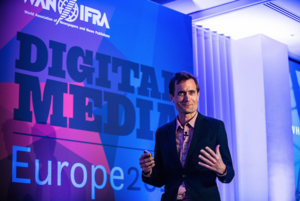 “But there are three elements to content marketing,” Wilding said. “There is the production/distribution, then there is the consumption/sharing, but the third element is the attention. You can not assume that you have people’s attention.”

Twitter has done neuro-research into the stimulus registered in the different areas of the brain as people flip through their Twitter feed.

“The first thing we found was that people picked up cues about who was tweeting incredibly quickly,” he said. “The next thing was that an emotional response was incredibly important – funny or moving content really helped drive intensity and recall. Anything that then prompted interaction ensured the encoding of memory.”

“Micro storytelling”: Be funny or moving and get to the point quickly

Wilding then showed two Vines. One of two dancers, all rhythm and sex appeal, and one of a car effectively playing basketball. A player threw the ball to the boot (trunk) of the car, which opened, bouncing the ball to the bonnet, which also opened, and bounced the ball back up and through the hoop. Funny, curiously hypnotic, and created by the car manufacturer. Wilding pointed out that both Vines were entertaining and eminently shareable, but that the second Vine triggered better recall due to the element of story to it. “Micro storytelling” as Wilding put it.

“Which means that to prosper, brands should make branding instantly identifiable, they need to drive a strong emotional response – funny, or moving – and they need to trigger interaction while getting to the point quickly”.

While showcasing a number of Vines and Periscope videos spanning the world (literally in the case of the Skyscanner-sponsored travel video) and highlighting the quality that can be brought to six seconds (the timespan of a Vine) with a sponsored video from Chanel, Wilding carefully saved the best for last.

To underline his point, Wilding finished with a six-second Vine DIY tip dealing with a stripped-out screw. His point was that although it was only six seconds it was well created, had a storyline, and an element of surprise, which gave it all the elements needed to be the most memorable thing we would see today.

He wasn’t wrong. It certainly stuck in the mind of this observer.

“Branded content will be at the heart of every marketing strategy”

During the same session, Justin Kirby, VP/Strategic Content Marketing, Tenthwave Digital LLC stated: “Branded content will be at the heart of every marketing strategy. The problem is how do you define it.”

Kirby took us on a brief tour of the branded content making itself noticed around the world, stopping en route at The Beauty Inside, a show by Intel and Toshiba that gained 70 million views and showing an eye-catching sitcom from Finland called Brandarit that features the antics of an advertising agency punctuated with ad breaks featuring the adverts from the show.

“Brands need to rethink the concept of risk if they are going to become content creators.”

Refocus on the basics: Consumers are driven by their desires

To which Nicolas Roope, the co-founder of digital agency POKE, added “it’s an enormous struggle to adapt – and making advertising films is the easy part.” His point was that media need to get beyond the issues often raised about native advertising and branded content and refocus on the basics.

“The most useful way of thinking about it is to come back to the consumer and accept that they are not prejudiced about form, but instead are driven by their desires,” Roope said. “What you see so often when you look at media properties is a conflict [between content and advertising] that ends as an abuse of the user as their interests aren’t reconciled with commercial need.”

Resonance and quality of the experience

Roope cited recent work with design magazine Wallpaper and noted that “the answer was to invite advertisers to really dominate and do awesome stuff to delight the user. For Wallpaper the job is done; Wallpaper don’t care if it is their content or the advertiser’s if the net result is that the user is happy then they will be back. The principles driving change are very simple – the resonance, and the quality of the experience.”

Roope pointed out that publishers give “too much status and love to content – editors don’t like advertising” yet what we are really talking about now are the “powerful moments when the two are blended, seamless, while respecting the users and maximising the experience. It’s not about ‘sticking it on YouTube’ – it’s not about ‘sticking it’ anywhere, it’s about creating experience and that’s where the opportunities lie for publishers.”

Branded content is the future. On the basis of some of the examples being shown at Digital Media Europe that just might not be such a bad thing – as long as publishers and brands alike retain that focus on the user.