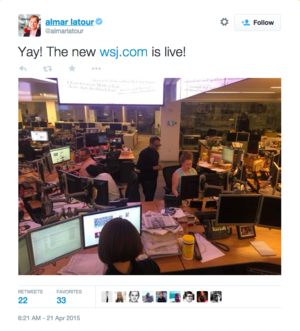 The change heavily reflects the evolution of user access; mobile has become the primary doorway to information, according to Edward Roussel, the Wall Street Journal’s chief innovation officer.

“We think that this moment is really probably as significant, if not more so, than when our digital team moved into what was then the print newsroom,” says Almar Latour, the Journal’s executive editor. “Right now, this is a new milestone for us. The editors themselves, the editors for web and mobile, will play a leading role in shaping and creating future product.”

As Ken Doctor points out, this is WSJ’s first refurbishment since 2008, whilst publications of a similar stature like the New York Times and the Guardian have already made such changes over the past few years. While he appreciates that the site is “lighter and more visual” and has undergone “decluttering”, the timing of its launch – according to Doctor – really does suggest WSJ is “plainly playing catchup”.

The Journal has been very successful in terms of digital subscriptions, one of its strengths being the flexibility to adjust its paywall according to its marketing needs. “In 2016, I hope we see more use of the technologies inside smartphones in relation to news and how it’s delivered. For instance, recognizing your patterns — what content you gravitate toward, the times of day you launch the app, whether and when you watch video to provide more news and content you might be interested in,” says Emily Banks, WSJ’s lead news editor for mobile, in a recent interview with WAN-IFRA.

Consistency across screens and devices

The fact that mobile has become so significant in the world of media does not mean it should be the sole focus, though, and WSJ’s redesign undeniably reflects that in its consistency across all screens and devices and in its adaptation to mobility. As Latour has explained, desktop usage is “still very robust,” and he expects the number of mobile visitors to “grow aggressively.” By launching a website that delivers a unitary experience via multiple platforms, the daily newspaper has taken a substantial step closer towards catering to its digital audience: The Journal’s 700,000 digital-only subscribers are now offered a truly unified and intuitive interaction with the product.

By investing in this digital transformation, the WSJ has paved a comfortable way for itself which we can surmise will only lead to facilitated innovation – another asset of an adjustable digital platform. “We think this is a significant next step to help shape our digital future in a much more effective way than we have in the past,” says Latour.

An additional outcome of the WSJ’s recent alterations is, as a matter of course, the WSJ’s extended employment of Apple products through its Apple Watch app, yet another example of making good use of seamless interconnectability. “A lot of what our team has looked at is the interaction between the iPhone and the watch,” Roussel divulged. And so, Friday, 24 April, brings with it another fruit of the newspaper’s labor.