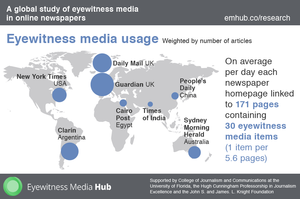 “It’s going to be absolutely vital for news organisations and journalists to show themselves to be ethical and trustworthy [in their use of eyewitness media]. Those that fail to do so are going to be left behind,” Pete Brown told the World Editors Forum after the launch of his study.

In August 2014, an Australian woman posted an innocuous picture to Instagram while out socialising with friends. Maddy Campbell had been invited into the VIP section at a venue by musician Stefan Gordon, better known as ‘Redfoo’, part of music duo “LMFAO” and judge of Australian X Factor. The Instagram post featured Ms Campbell, her companion and Redfoo with the caption “Just met redfoo #VIP #nohateplez”.

Hours later Redfoo was glassed by a patron. The story made headlines around Australia. Ms Campbell’s Instagram was used by multiple news organisations around the country. According to Peter Brown, author of “A Global Study of Eyewitness Media in Online Newspaper Sites”, the case study shows why dialogue is ‘crucial’ between news organisations and the uploaders of content. “Had [Ms Campbell] been aware her face was going to be all over the news in relation to a pretty unpleasant physical attack on a public figure, she could have taken action to try and stop it,” Brown says.

According to Claire Wardle, co-founder of Eyewitness Media Hub and new Tow Centre for Digital Journalism appointment, “This is happening frequently and most uploaders don’t realise they have a right to complain.”

Ignorance on part of the uploaders

One of the key findings of the study was the ignorance on the part of uploaders about the rights of their content. “The main thing it has told me is that more needs to be done to educate uploaders about their rights,” Brown says.

Wardle agrees. “Many uploaders don’t understand that the copyright exists with them, so newsrooms can’t just take their content off platform without permission,” she says. “For that reason they’re not chasing newsrooms if they see their content being used. They shrug their shoulders and say it’s fair game, and it’s not the interests of a newsroom to educate uploaders. Their ignorance makes it easier (and cheaper) for them.”

According to Wardle, uploaders are unaware of how quickly their content can be shared. “Audiences also don’t realise that newsrooms can embed without seeking permission,” she says. “They don’t understand that a picture they uploaded to Instagram for their friends can be used by news websites across the world.”

The study found that uploaders often assumed that their content was ‘fair game’ for news organisations. “The people I spoke to assumed that the content they had posted to social networks was automatically ‘fair game’ and that they had no right or ability to control when, where and how it got used,” Brown explains. “But that isn’t necessarily the case. Uploaders retain the copyright of their content and, in the UK at least, it can only be used without their permission if it relates to current events and is sufficiently credited.”

Newsrooms who use eyewitness media often forget about the consequences for uploads Brown says. “People can feel powerless to challenge when, where and how their content has been used [by news organisations] – and let’s not forget that photos used in news stories can leave a pretty substantial digital footprint,” he says.” This bothers me because not only can it leave eyewitnesses feeling exploited, it can also cause them anxiety, embarrassment and anger that they’ve done little or nothing to encourage – and in some instances have actively tried to avoid.”

in another case study from Australia highlighted by Brown, a man who took a photo of a sign related to a racism incident found himself on the receiving end of racist abuse in August 2014. The journalist who had used his photo did not contact the uploader, but attributed the photo to him. “[The uploader] received some very unpleasant abuse via Twitter, which he is adamant was a direct result of his Twitter handle being published by the press,” Brown says.

The case is an example of how uploaders often attract unwelcome attention when their content is used or attributed by newsrooms without first contacting the uploader. “While that credit might typically be considered good practice,” Brown says, “This man wasn’t unwilling for his content to be published per se; however, if dialogue had been opened he would have been able to specify that he didn’t want to have his handle or name published alongside his photo, thereby reducing the possibility of being subjected to unpleasant abuse.”

One of the findings of the study was the legal and financial risks associated with the use of UGC content by newsrooms. “I’m convinced that pretty soon we’re going to see quite a big lawsuit around these issues,” Wardle says.

In late 2013, news agencies Agence France-Presse (AFP) and Getty Images were forced to pay $1.2 million to a freelance photographer for the use of a photo he posted to Twitter during the Haiti earthquakes.

Brown warns that while there a jurisdictional differences in relation to copyright laws, there’s one common thread. “[The] legal risks relates to the use of UGC without permission and/or credit,” he says. “It seems to me that this is a bit of a muddy area at the moment.”

“We’re yet to have a UGC case go through the courts in the UK, but it may not be long before we see one and it doesn’t seem particularly prudent for news organisations to take risks in area when it can be avoided by simply securing clearance from the copyright holder.”

News organisations, their dependence on eyewitness media as well as unclear copyright issues surrounding use of social media content means that lawsuits may be inevitable says Wardle. “When you realise the scale of the reliance on eyewitness media and you see how infrequently permission is sought, or credit given, you realise that someone is going to take a newsroom to court for using their footage, not seeking permission or not sharing revenue (if they were running pre-roll ads).”

There are a plethora of ethical issues that are raised when news organisations use graphic content Wardle explains. “We’ve seen numerous examples of serious and sometimes graphic news footage being scraped from Youtube and run with pre-roll ads,” she says.

In light of the growing use of social media by terrorist organisations like ISIS, and as newsrooms become increasingly dependent on UGC, the need for transparency becomes greater. “If footage has been filmed on a phone that belongs to an activist vs a humanitarian worker vs an ISIS fighter vs an eyewitness, who they are makes a significant difference,” says Wardle. “By assuming the audience knows it’s eyewitness media because it’s shaky, and doesn’t think it’s worth labelling it as such, they are doing the audience a disservice.”

Important context is lost if UGC used by news organisations is improperly attributed says Brown. “Labelling is particularly important when you’re dealing with content produced by activists or other groups that may have a specific agenda, motivation or political position. Failure to label such material means that the audience is being deprived of vital context.”

Properly labelling content as UGC is essential as a fact-checking measure. “As one of the journalists we interviewed for an earlier project put it, ‘If you’re going to use something that was filmed when you weren’t there and no one you know was there, you can’t 100 percent ever say it is a fact,'” Brown says.

What should newsrooms do?

“One of the themes that runs through the case studies is that no two eyewitnesses are the same,” Brown says. “Newsrooms can’t just assume that someone will be happy for their UGC to be used as long as it or isn’t credited, for example.”

“The only way the wishes of the eyewitness can be established, understood and respected is by opening dialogue. That’s the only way newsrooms can be certain of establishing a mutually beneficial arrangement between themselves and the eyewitness whose content they wish to use.”

For Wardle, the research shows that there needs to be a fundamental cultural shift within newsrooms. “The number one issue in most newsrooms is ignorance amongst journalists who just don’t understand content from the social web is not free to take,” she says.

“Every person in a newsroom understands they can’t just steal football coverage from another broadcaster without paying for and crediting it. People understand sports rights because they know what could happen if they screw up. The same cultural shift needs to happen in newsrooms.”

With increasingly tight budget constraints on news organisations and the 24 hour news cycle, how can newsrooms take into account these issues when faced with deadlines?

“Journalists are often working under enormous pressure,” Brown says. “Nobody’s pretending they aren’t. But a quick call or message to the uploader can make a big difference.”

“If in doubt, speak to the uploader,” Brown explains. “Find out what they are and aren’t happy with.”

Consistency the labelling of eyewitness media is another measure newsrooms can implement. “It doesn’t take any extra effort to be consistent in the language used to describe unverified content,” Brown says. “For example, ‘a video purporting to show’ is less misleading than ‘a video showing.’

As newsrooms continue to take social media content in their news pieces, what happens if users just turn their social media profiles to private instead? “That’s a perfectly valid question,” Brown agrees. “But if people make their accounts private then what happens?”

“Their photos and videos are no longer accessible to newsgatherers. That can’t be a desirable outcome for anybody.”

“In that regard,” Brown continues, “Short terms gains – getting the photo through unethical or inconsiderate means in order to beat or just keep pace with the opposition, for example – may come at a cost in the mid to long term.”

Note: Claire Wardle will speak about Eyewitness Media at the World News Media Congress in Washington DC in June.