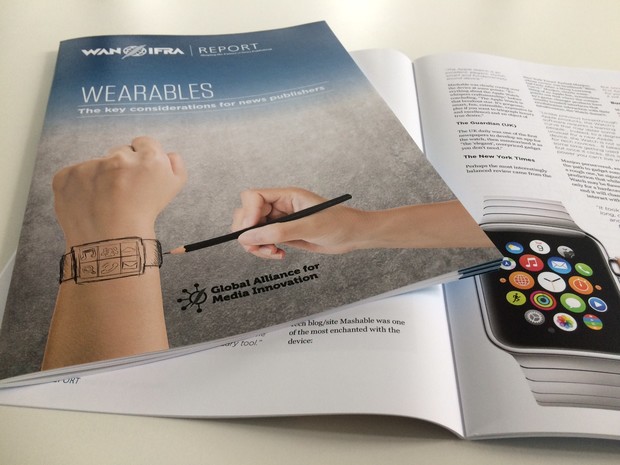 Leave it to Apple to get the buzz, and consumers, swirling around smartwatches and wearables. On launch day, nearly 1 million Apple Watches were sold, according to estimates from Slice Intelligence.

It seems the arrival of the Apple Watch has brought a renewed interest in wearables, but many questions as well. Is the Apple Watch overhyped? Will the Apple Watch somehow serve as a bridge to a true wearables revolution, involving not just smartwatches but also virtual reality (like Facebook’s Oculus Rift) and augmented reality devices (like Google Glass)?

Mixed reviews of the Apple Watch and the uncertainty surrounding future development of smartwatch platforms have given some people – also in our industry – pause for thought. Begging the question for news publishers: “What should we do about smartwatches and other wearables?” “How do we assess their potential?”

Of course the Apple Watch mania caught our attention

WAN-IFRA and GAMI have organised a number of workshops around the wearables topic in the past year, as recently as late April at Digital Media Europe (DME) 2015 in London – and another coming up at the World News Media Congress.

Most of the publishers we spoke to for the wearables report have chosen to act, some cautiously for now, others full steam ahead. Some are sitting on the sidelines, waiting to see how things pan out in these early days. All approaches are understandable.

Key takeaways from the report:

What they are saying about wearables

The report includes a number of case studies of publishers around the world that are launching smartwatch and wearables strategies, as well as insights and advice from mobile, design and usability experts.

Here are some of their thoughts on wearables.

“As the next generation of devices becomes more ubiquitous, we will build new interactions, but with wearables we are seeing a lot of attempts to take what we’ve already done on other screens and port them over to the new device. That’s an age-old problem – the first reaction to TV cameras was to read radio scripts into them, and realistically it will involve living with the new technology for a while before we start coming up with better interactions.”

“As for developing Moments [the Guardian’s dedicated Apple Watch app], I really enjoyed it – there is something important about enjoying experimentation, and I don’t think companies will be successful unless they do enjoy experimentation. One of the lovely things about developing for the platform is that you can’t do it in a vacuum. You can’t have developers doing this alone, as there are editorial choices to be made about what you put in, so it involves people from across the whole business.”

“Leaving aside the Jetsons-style futurism, this means we now know what screen the user is on. Let’s say that my print subscription expires – well, now I can be notified at the proper time and on the proper device that it is the moment to extend my subscription. That’s just one down-to-earth example of harvesting what is now available. We are at the beginning of big data usage by publishers and these platforms help us build efficient systems.”

“Anything we wear we want to look good, right? Smartwatches are not going to be different, and the models already shown by Apple are stylish enough that any of us would be happy to carry them on our wrists. The design that I am interested in, however, goes beyond the smartwatch itself.”

“Don’t rebuild news once again around yet another platform. Instead, rebuild news around people — individuals and communities with their distinct interests and needs — and that will help you adapt to any platform.”

WAN-IFRA members can download the report for free; non-members can purchase the report. There will be a webinar on the topic on 20 May.