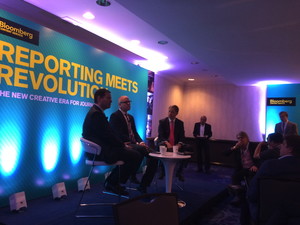 When two renowned journalists who have done it all — print, TV, digital and book publishing — share their experience on integrating legacy media with digital, people listen. Managing editors of Bloomberg Politics John Heilemann and Mark Halperin spoke at a panel discussion organised by Bloomberg Content Service at the 67th World Newspaper Congress in Washington, D.C.

The key to successfully running a media company is leveraging video production, hiring the best talent on the market, establishing a personal brand for each star journalist, and pushing your staff for faster change.

Heilmann says legacy media have been “playing defense” for way too long, and change is not happening fast enough. Fifteen years ago such things as digital photos and online forums seemed like science fiction. Now we are almost two decades in, the future is here, and a business built on digital platforms might not just survive but thrive.

The Economist went through transformation and has become not only a digital brand but one of a few truly global digital brands. Heilman says The Economist produces tens of products and has taken a leading role in the industry on thinking how to make the global model work.

Coming from a TV background, Halperin insists we are just at the beginning of the innovations in video production. “To me the biggest challenge is video. Twenty-five million Americans watch evening news daily. The reason evening news still have huge audiences is because there’s nothing else on the market that is quite what those guys do. What do we produce to compete with them? This is a question for guys from legacy media,” says Halperin. He suggests the nightly space will stay with traditional media companies, but everyone should be trying new formats.

Vice Media and a few other companies have disrupted the traditional TV model with shorter formats that are easily shared and accessible on demand. John Heilman added that it would be hard for traditional media to take on TV because of the production costs. However, he pointed out that TV companies in return feel quite comfortable taking on traditional media space by producing TV products that they turn into digital products, which then go viral. Jimmy Fallon and John Oliver would be the ones to look up to.

A perfect hybrid is a massive success

What happens, though, when a digital company hires journalists from both sides, TV and traditional, and produces a perfect hybrid? Yahoo did exactly that with “News with Kattie Couric”. The result? Her best-performing videos draw between 1 million and 2 million views. Halperin says, “Yahoo doesn’t have legacy brand. They have Katie but who else do they have?”

Mark Halperin is a strong believer that working for a great brand and creating wonderful content is not enough to become audience’s darling. The digital revolution has brought a world where everybody is on a constant deadline. Journalists have to know what a “selfie” is, and they have to know how to communicate in 140 characters. “You have to have strong individual brand. You must have resonance with the audience and lead the audience,” says Halperin.

John Hellemann adds, “The responsibility of promoting your content is an opportunity, too. Huge numbers of publishers thought they would get readers one way or another. They thought they’d build a wall and live behind it. That thinking was far, far away from reality, where people choose from lots of free content, open protocols, and social networks, and they don’t see the difference between a video and a text anymore. Look at today’s students. They all have an iPhone, Go-Pro and a laptop. If you want to be ahead of the curve, there is a tremendous opportunity in marrying video with texts.”

When asked what would would they if they could go back in time, Halperin said he would hire a guy who could care less about legacy media, and about having separate operations between traditional side and digital side.