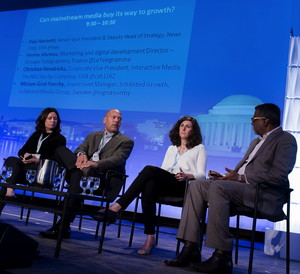 Chris Hendricks, Corporate Vice President, Interactive Media at The McClatchy Company, USA, told the audience, “We invest a lot in things that help our print and digital assets, but we also invest in adjacent companies to help grow our business. Most recent investments include one we announced today in a company called Moonlighting.” That company, a digital job exchange focused on short-term jobs, will be integrated in all McClatchy print and digital properties in all their 28 U.S. markets.

Hendricks, a 23-year veteran at McClatchy, noted the investments the company made years ago in Classified Ventures, Cars.com and Apartments.com, all of which were sold by McClatchy in the past year.

Miriam Grut Norrby, Investment Manager, Schibsted Media Group, Sweden, noted that her company has been making investments in digital for the past decade. To date, the company has made more than 40 investments in entrepreneurial start-ups.

Norrby said that even legacy media operations were once start-up companies. For Schibsted, she said, “All of our investments internally are treated as independent companies. If you want people to succeed and take risks, you have to give them incentives to do so.”

Perrine Albrieux, marketing and digital development director of Groupe Télégramme, France, shared that her company has grown print circulation by 8 percent in the last 10 years, unusual for a traditional newspaper company. Investment strategy for Groupe Télégramme centers on events, sports and music. More than 30 such companies received investment from Groupe Télégramme, and it now runs two of the five biggest festivals in France.

The company’s digital investments date back to 2000, with an investment in a start-up operation for employment ads that was the first job board in the country. Today, half of Groupe Télégramme’s revenue is derived from the newspaper, about one-third from events, and the remainder from digital operations.

Many investments in classifieds operations

Many investments in the panelists’ companies were related to classified advertising, as noted by moderator Raju Narisetti, Senior Vice President & Deputy Head of Strategy, News Corp. The strategy executed by News Corp. in online classifieds means that today, “News Corp is probably one of the biggest digital real estate companies in the world,” Narisetti said.

Panelists agreed that investing in the daily deals market has been a success. Hendricks pointed to dealsaver.com, a wholly-owned subsidiary of McClatchy launched in 2011. McClatchy now has one deal saver sales representative in each of their markets.

For Schibsted, a daily deal operation was an outgrowth of a relationship with local entrepreneurs. Norrby said, “Two guys from Gothenburg, Sweden, came to with us an idea. It was really not good, but we liked them. Six months later they came back and we ended up investing in it, a deal product, and it has outpaced Groupon in the market.”

Panelists also acknowledged that the character of the start-up management team was in some cases more important that the concept pitched by the entrepreneurs. In one sense, investors are “betting on the management team,” according to Hendricks.

“Some entrepreneurs tend to raise their money too late,” Norrby said. She advised, “One selling point to get through the door with us is to say how we are a good fit, how can we both benefit.”

From the standpoint of long-term strategic investors – which is what the panel represented – engaging with a local audience in local communities is a key element. “We are never better than our network, our community,” Norrby declared.

Albrieux noted that start-ups and media companies need to learn and share their knowledge of the local market for success and that the strongest asset is the local audience.

An especially interesting comment came from Hendricks, when he was asked to name one investment in which his company could take special pride: “We engaged the Stanford Design School beginning in mid-2014 to help us reinvent and reorganize the company using Design Thinking principles.

“The Design School and its principles are not only helping us structurally – they are also helping us change our company’s culture.”