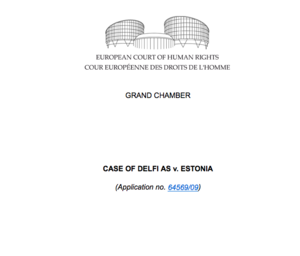 The decision by the European Court to effectively hold publishers liable for comments made on their news websites drew immediate criticism from media freedom organisations, including the Media Legal Defense Initiative, which had submitted a brief to the court, supported by 26 media organisations from around the world, stressing the importance of user comments in online media. It also warned that imposing liability on intermediaries could result in news websites closing down their comments sections or proactively removing comments that they think could be offensive, which would severely limit public debate.

In reaction to the judgement, MDLF’s CEO, Peter Noorlander, expressed disappointment with the judgment: “Comment sections are important: they allow for debate on issues of public interest and have become an integral part of online media. Holding organisations liable for user comments hampers freedom of speech.”

Digital rights organization Access agreed: “Despite warnings from groups defending vulnerable internet users, as well as from large media companies, the Court has dramatically shifted the internet away from the free expression and privacy protections that created the internet as we know it,” commented Peter Micek, Senior Policy Counsel at Access.

In January 2006 Delfi, one of the largest news portal in Estonia, published an article about a ferry company and its decision, which affected the local community, to change the route of its ferries that caused ice-breaks. The article sparked a debate that resulted in highly offensive anonymous comments being posted online, including personal threats directed against the ferry company owner.

At the request of the ferry company, Delfi removed the offensive comments about six weeks after they appeared. The owner of the ferry company decided to sue Delfi in April 2006 and obtained a judgement against the news portal that was held accountable for the defamatory comments, and ordered to pay the equivalent of 320 € in damages.

In June 2009 Estonia’s Supreme Court dismissed Delfi’s appeal, especially rejecting that the role of the portal as an information society service provider or storage host was merely technical, passive and neutral – which Delfi argued for.

In October 2013, in its Chamber judgment the Court held, unanimously, that there had been no violation of Article 10. It found that the “finding of liability by the Estonian courts had been a justified and proportionate restriction on the portal’s right to freedom of expression, in particular, because: the comments were highly offensive; the portal had failed to prevent them from becoming public, profited from their existence, but allowed their authors to remain anonymous; and, the fine imposed by the Estonian courts had not been excessive.”

The case has then been referred to the Grand Chamber which delivered yesterday its judgement finding no violation of Article 10 and holding Delfi liable for the defamatory comments.

For an explanation of the key aspects of the judgement see LSE Media Policy Project’s article by Professor Lorna Woods.