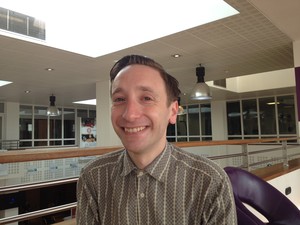 Charlie Phillips: The Guardian has gotten very enthusiastic about documentary, looking at films like Citizenfour and a lot of the social changes films. Our organisation believes that documentary is a form of journalism and a way of transmitting information to a wider set of people.

We have a massive worldwide audience on all our digital platforms. Original video is a powerful format to keep the younger generation interested and engaged with our brand. Our younger audience wants a new kind of storytelling and that’s what documentary does for The Guardian.

As for my role specifically, to make this work we need to be commissioning a lot of video. Our needs requires more than what we would be able to achieve with our internal team. I was recruited to work with external partners as with my previous professional experiences I have developed a broad network of films makers, production companies and a lot of people in the documentary sector.

What roadmap did The Guardian management give you when they brought you in?

For the moment, the focus is on that weekly Monday morning rendezvous. We’re not quite there yet because a lot of the work I commissioned when joining the company is not ready yet, it takes time to make documentaries … We need to release good films so we attract audience, but also people talk about the films, that it’s spread and shared on social media and that it gets mentions in other medias as well to enhance Guardian’s reputation for documentaries making.

Coming back to your weekly documentary plan: why 15 minutes and why Monday morning?

We decided we would start by proposing short content because it’s hard to make people watch longer content online at the moment. But those documentaries had to be long enough to be able to tell full stories, with a start, middle and an end and properly investigated. Though to be honest, we’ve had five-minute documentaries, and we’ve also had one that was 17 minutes.

If someone comes with a film that is amazing, it’s 25 minutes, but you’re gripped, then we’ll do it. It’s really ‘Opportunity Land.’ The Monday morning [timeframe] is because we have set a planning with other original video contents.

For example, we have a new commentary video on the Wednesday, an expert talking to camera, with animation, graphics, context etc. There’s also a dating series, using Google Glass, on the Thursday.

The Monday morning documentary idea was to start the week with a major commission that would be our ‘flagship morning.’ It sort of starts the discussion with a topic we think is worth debating. Having that at the beginning of the week allows time for the conversation to spread though social networks. We release it on the Monday morning and sometimes it does not pick up before the afternoon when the U.S. wakes up, we have as much traffic there than in the UK.

Does having a large part of your audience watching the video on smartphones and tablets imposes technical constraints to the filmmakers, for example doing vertical videos?

Not as much as you would think actually. We don’t talk too much of that with the filmmakers. Our documentaries are based on storytelling, it’s not the beautiful images you would do if the objective was showing the film in a movie theatre or on a big TV screen. We want the film to look really good, but it’s not a piece of art. And the filmmaker knows that his film is going to be seen on all kind of connected devices.

What difference is there between a documentary and the type of video your internal team produces?

That’s something we discuss a lot with the editor who commissions the news video. We work very closely, and sometimes there are indeed overlaps between what he does and what I do. How we define the difference is roughly that a news video is very quick turn around; it’s about getting the story out as quickly as possible. Usually it means a presenter, a voice-over, lots of interviews.

What documentary aims to do is more reflective, we will take a story and spend a few months on it. It is contemporary topics, but not current affairs. It might be something that is not yet in the news; it’s more setting the news agenda as opposed to reacting to the news agenda.

When do you think you will be ready to meet your weekly objective?

We’re nearly there. By September, I believe we will be ready to release one new documentary almost every week. If we miss a week it does not really matter though, online is not like linear TV: [where] the screen goes black if you don’t have something to show. There’s always something going on in digital.

The fact that a lot of the video viewers will come from Facebook, as we put all the documentaries on our Facebook page and on YouTube, gives a lifecycle to the films that is longer that just one week. Social platforms are dominant in the ways people discover our videos.

Twitter and Facebook messages are key to drive traffic. You have also other referrals. Reddit for the US market helps a lot if they pick up a video. It’s also crucial if we feature the video on the highlights section of our home page.

What is your ‘price list’ for the documentaries you commission?

We don’t really operate on a tariff, but broadly, for an original 15 minute commission, starting from scratch, we would pay around 5,000/6,000 GBP (approximately 7,000 to 8,500 euros). It can be more if it’s something we really want, and if we can partner with a foundation or a co-producer, and then we can double that budget.

If it’s a companion piece to a longer film: a cut down; a focus on a special character in the film or video material that were not included in the final version of the film along with some of the video used, then it’s somewhere between 1,000 to 5,000 pounds.

This week we have an interesting example with a documentary on birth control methods that is currently active in a crowdfunding campaign on Kickstarter. In this case, we’ve had access to an exclusive story and The Guardian helps the filmmakers to raise the money they need to finish the long version of this documentary.

Do you expect a secondary market for the original documentary you commission?

We have a distribution contract with Journeyman Pictures, and they sell to mostly other online platforms, regional TVs. But our primary focus is building our audience; it’s not yet about making money with distribution rights. Eventually there will be pressure to make money, but right now we are very much experimenting, trying to do good things and see what happens.

At Sunny Side of the Doc this year, there were a lot of discussions on VR projects. We expect several competitors entering the Oculus Rift market. Gartner predicts for 2018, more than 25 million head-mounted displays (HMDs) will have been sold. Is that a technology you should start looking at?

Actually, I am very interested in Virtual Reality for an organisation like The Guardian. There are very interesting projects where you are immerged in real-life environment, in way that no newspaper would have been able to do before.

We’re doing a big climate change campaign at the moment (Editor’s note: Keep it in the ground) and you could do something very interesting with the effects of being surrounded by climate change. It’s still quite expensive, complicated, but now that you have things like the Google cardboard, VR could become a mass medium. And in a way I am more interested by that than with the more desktop-based interactive projects, which are often too poetic, and not enough storytelling for my liking.

When will you start producing VR documentaries, and what are the costs for these productions?

We have a couple of VR documentaries projects for the start of 2016. It’s still quite complicated, as the technology for filming in virtual reality still feels quite rudimentary. The right production platform will be developed over time, probably very soon.

For the documentaries we want to initiate next year, it will be partly done in-house by our interactive team and partly using external resources. If you want to do those films well, it’s relatively expensive, around 150,000 GBP (approximately 210,000 euros) for a 10-minute film.