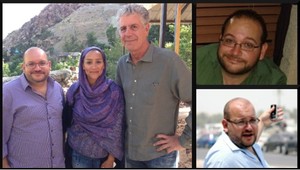 The Post reported last week that the Revolutionary Courts are: “…notorious among human rights activists as venues where verdicts are preordained and proceedings can finish in minutes.” According to expert observers, it’s the branch of Iran’s court system that hears national-security cases – and such cases extend to the prosecution of dissidents and journalists.

“Iran Holds America Hostage” a Washington Post headline read yesterday, on a post analysing Rezaian’s trial. The trial – which is closed – began last week before a judge who was once placed on a human rights watchlist by the EU. The charges brought against Rezaian have  been described by the State Department, which is lobbying for Rezaian’s release, as “absurd”.

“The US will continue to press for the release of Washington Post journalist Jason Rezaian held in Iran,” US Ambassador Thomas A. Shannon, Jr., Counselor of the US Department of State said during the #WNC15 opening ceremony. The Golden Pen of Freedom was collectively awarded to slain journalists from around the world during the ceremony.

According to the Committee to Protect Journalists, there were 221 journalists imprisoned around the world in December 2014.

Marty Baron called on the gathered news media to sign a petition for Rezaian’s release during an on-stage interview with Rappler’s Maria Ressa. Afterwards, he told Julie Posetti (see video interview below) that he remains extremely concerned that the trial will not be fair and he called on Iran to abide by its United Nations obligations. He also highlighted the difficulties in managing and responding to the problem of the increasing targeting of journalists in the course of their work.