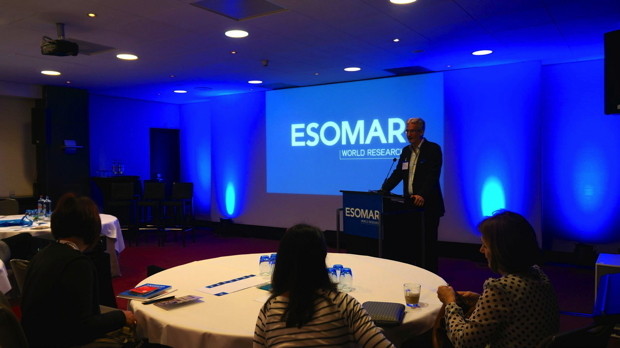 “Multi-platform metrics are no longer just a nice-to-have. Their lack is an embarrassing hole, especially on mobile,” said Richard Marks of Research the Media in his keynote presentation. “This is especially true when the goal for many media companies is to show growth, not entropy, when it comes to their overall audience.”

ESOMAR’s seminar brought together advertisers and researchers to discuss audience measurement in today’s increasingly fragmented media scene, and to examine how advertisers and media companies are making progress in accounting for their multi-platform audiences.

A key message was that while significant challenges still exist, technology is becoming less and less of an inhibiting factor. However, publishers can’t afford to wait for a comprehensive solution to emerge. While they explore new measurement initiatives and methodologies, it is important to make the most of the data that is already available.

Below is a summary of the main points from the event’s discussions.

Measuring audiences used to be a relatively easy task, and each platform had its own established method for doing it. But as today’s media companies publish their content on several channels – and the number is likely only to grow in the future – measuring their audiences has become a complicated task.

The new digital platforms come with a benefit, however: They all have audience measurement tools built into them, giving publishers access to an unprecedented amount of data on their audiences’ media habits.

On the other hand, that also means audience researchers are faced with masses of increasingly complex data, and analysing it requires new skillsets. One must not only know how to process and make sense of the vast data reserves, but also how to combine different data sources with one another. An increasingly important skill is the ability to understand and exploit algorithms that facilitate data analysis.

That creates new expectations of the people in the audience research community. There is a growing need for analysts who are confident with handling and manipulating enormous datasets, and who have a scientific approach to data analysis.

At the same time, though, there is a need for people who can see beyond numbers, and the ability to bring context to data also will become essential. Data is not the same thing as insight. People who can extract stories from data will have a vital role in analysing audience behaviour.

A similar development is happening among advertising professionals, who are experiencing a major change with the emergence of programmatic advertising, which involves automated trading based on algorithms. “Many things will be automated, but there will always be a role for people, although their profile will change,” said Léon Liest, programmatic solutions manager at Cadreon.

Liest also noted that programmatic has its limits, and supplements rather than replacing traditional approaches to advertising campaigns and buying: “It’s important to remember that programmatic buying is not a strategy – it’s a technology.”

The impact of social media

Audience researchers are increasingly focusing on social media and the role they play in audiences’ overall media consumption habits. Twitter, for instance, is emerging as a medium that amplifies other media, instead of replacing them, according to Jake Steadman, director of research at Twitter.

New studies show that viewers who use Twitter while watching television spend more time in front of their TV sets than average by, for example, tweeting about the programme they are watching instead of leaving the room during commercial breaks.

But more research is required to better understand the power of social media as part of a wider communication strategy. While social media allow for data collection in real time, the data don’t measure memorability – a key factor for advertisers.

Moreover, social media are often consumed simultaneously with other media, and some researchers and advertisers ask whether “shared time” – time spent consuming several media simultaneously – should be accounted for differently, because the viewer’s attention is divided and engagement with the content is likely to be less intense.

Finally, much of the research into the impact of social media to date has come from social media companies themselves. Because the platforms are keen to prove their value as advertising channels, advertisers are right to challenge their reporting and to demand more unbiased research on the topic.

The instantaneous metrics that social media offer are attractive to many marketing people, and there is growing interest in near-real-time measurements of other media as well. Traditional audience studies can take a long time to plan and execute, for instance when a large number of people is surveyed, and there can be a long delay between collection of the audience data and the final results.

Although in some cases real-time measurement can be useful, such as when adjusting content presentation on a homepage, several speakers at the seminar pointed out that real-time should not be an end in itself. In fact, when measuring audiences the benefits of real-time are likely to be small compared to the required effort.

Another area that audience researchers are increasingly looking into is engagement with content, and there is a growing number of initiatives that attempt to measure it. But it is unlikely that there will be an industry-wide definition of “engagement” any time soon.

“Everybody’s definition of what ‘engagement’ is is slightly different,” Andrew Green, Chief Marketing Officer, Ipsos, said in a separate interview. “Some publishers may benefit from one type of engagement questions while others might benefit from a different set of questions.

“All may be valid ways, but it’s hard to get consensus on a set of questions for an industry study,” he said. Green also noted that survey questions on “engagement” inevitably take up space that could be used for new cross-platform questions. “On balance, therefore, we are not seeing much progress on the engagement front.”

Legacy print media face a specific problem when attempting to combine print and digital metrics: print audience measurements typically rely on Average Issue Readership (AIR) methodologies, which measure the readership of an average issue of a publication. This standard approach from the print era makes it complicated to combine datasets on online readership with data on print reading. As long as AIR is used as the basis, online reading has to be defined so as to match this model, even if it makes little sense to measure “issues” of an online publication.

In fact, the consensus at the seminar was that international standards for cross-platform audience measurement are not likely to emerge in the near future. “Every country is different, so there is unlikely to be a universal standard,” said Green. He pointed out, however, that the general directions are similar in different markets: “There is more interviewing online, more engaging stimulus used within surveys to prompt readership, integration with passive online and mobile measurement services, and deeper investigation of engagement metrics.”

Yet the key message from the event was that the patchwork of different metrics and methodologies shouldn’t paralyse audience research. Because digital platforms have measurement tools built into them, getting information on audiences has never been easier. Technology is enabling measurement at a level that was simply not possible before, and new “hub & spoke” studies successfully combine data from various surveys, leveraging established audience measurement tools on a new level.

For content providers who wish to push multi-platform metrics on the agenda, seminar speakers recommended collaborating through joint industry committees, where the media industry can work together on standardising metrics.

Complexity will only increase

The overall message of the seminar was thus clear: We shouldn’t expect a magic solution that will deliver a set of reliable cross-media metrics. In fact, complexity will only increase. Some latest signs of that were the announcements of Facebook’s Instant Articles and Apple’s News app for iOS. Such new channels will only increase fragmentation of distribution platforms, and no one can predict what new channels will be used even in the near future.

Media outlets and advertisers will therefore have to make the most of the data and tools that are available to them now, even if they’re imprecise and limited. “Rough is enough,” said Leendert van Meerem from LVMR Media and Research Consultants. “We have to ask ourselves, do we absolutely need to measure in detail to get what we need?” he asked.

In the end, people just want answers and insight, van Meerem said, even if the available data is lacking in quantity and quality. On the other hand, the combined use of several data sources can partly compensate for any weaknesses in data.

It is likely that the most comprehensive and accurate methods of audience measurement will combine panel and survey data with the automated passive monitoring that digital platforms make possible. Integrating surveys with analytics will become more and more important, and any solutions will have to rely on diverse sources of data. Data may be imperfect, but it can still be useful.

Indeed, a growing number of initiatives bring together different measurement systems that track reading in print, online and on mobile devices. These projects rely on a mixture of survey questions and integration of online measurements from companies such as Nielsen and comScore. Green mentioned the work done on this in Australia as an encouraging example: “I expect to see lots more of this kind of work.”

Note: Media, data, and market research, among other related topics, will be discussed at ESOMAR’s 68th annual Congress in Dublin in September.